TO A WHOLE NEW WORLD

Text by Gillian Gabriel (UMS Intern Student)​Photos by Chiew Lin May​This story is about Kina, BJ, Sika and Soo being released to the forest enclosure for the first time in their lives!Attempt in releasing KinaAmong the four bears, Kina appears to be more curious about her surroundings because she is the first one that was brave enough to go out on the first day of the release. Although on the first day she spent most of the time staying on the ramp, she managed to pull herself out of her comfort zone. On the third day, Kina gracefully went out to grab some food and ate it. While enjoying all the fruits, there was the sounds of a chainsaw and blower. She continued to enjoy eating her food and went back inside the cage right after she finished eating. It seems that to Kina, food is way more important than anything else and nothing else can distract her while she is eating! 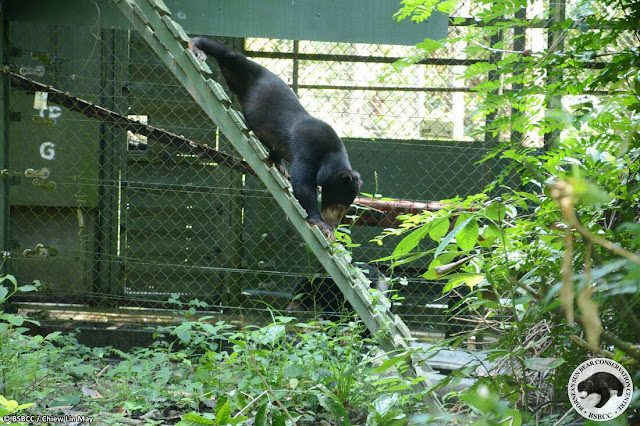 However, moments later, Kina decided to go out again and explore the surroundings. She continuously went back inside the cage every time she went out. Kina seemed so relaxed being in the outside world as she roamed around gracefully and used her incredible sense of smell to sniff around the area. 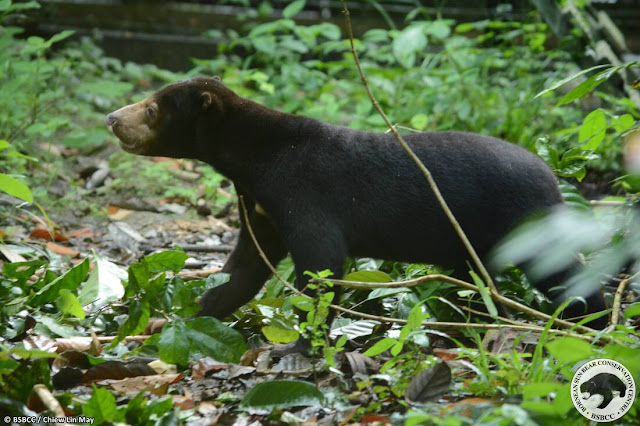 On the fourth day of release, Kina was now confident to go outside. She roamed around the forest enclosure, foraged, and at some point, she also dug the woods and the ground to find some termites to eat. Due to her high curiosity, she managed to explore almost the whole of the forest enclosure! 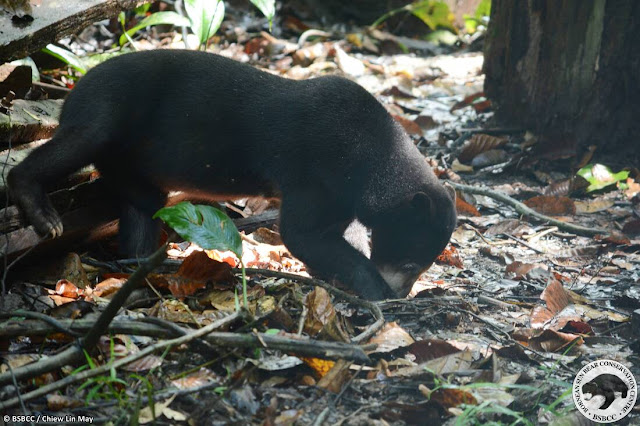 Apart from that, Kina is also an expert in climbing. She appears to be the most outgoing bear as she loves exploring the world by climbing up trees and enrichment. By doing so, she gets to see different parts of the forest enclosure from different views. 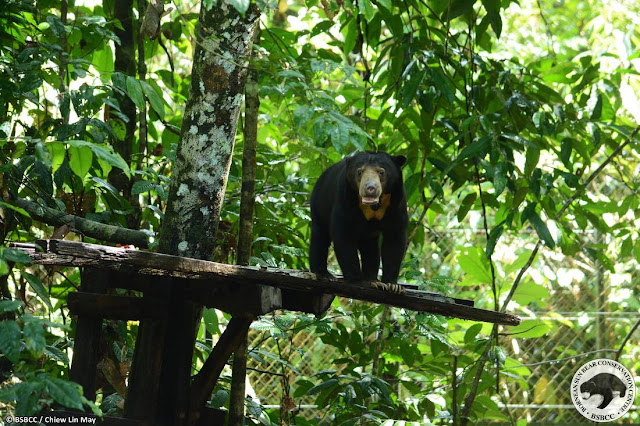 Kina is happy because she gets to enjoy the enrichment that was built by the bear keepers and the previous volunteer. 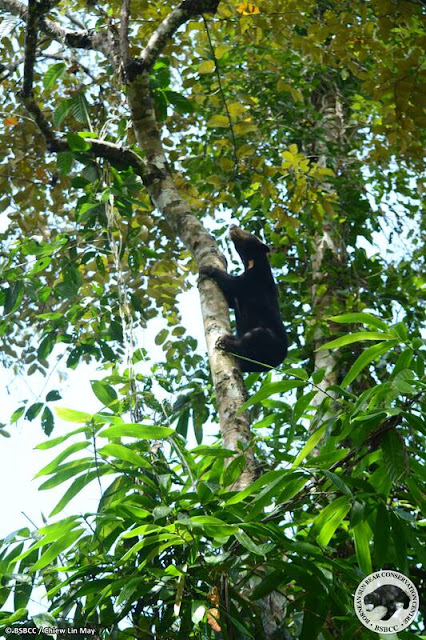 It was on a rainy day when Kina suddenly decided to climb up a tree. Kina is known to be the most active bear among her other friends and that is not just because she is the first one to go out into the forest enclosure, but it is because she normally prefers to live in solitary by isolating herself on top of a tree or an enrichment. Even before she was released to the forest enclosure, she loved spending her time alone, resting and climbing.​Attempt in releasing BJAt first, BJ was afraid to go outside. He would normally stay on the ramp and watch from afar. However, his curiosity has built up as he saw his friend, Kina, gracefully walking alone at the forest enclosure. Determined enough to step out, he finally, most likely slowly, went out to the forest enclosure to experience the outside world himself. It was soon enough when BJ finally felt secure when he stepped outside. He began to love being outside. 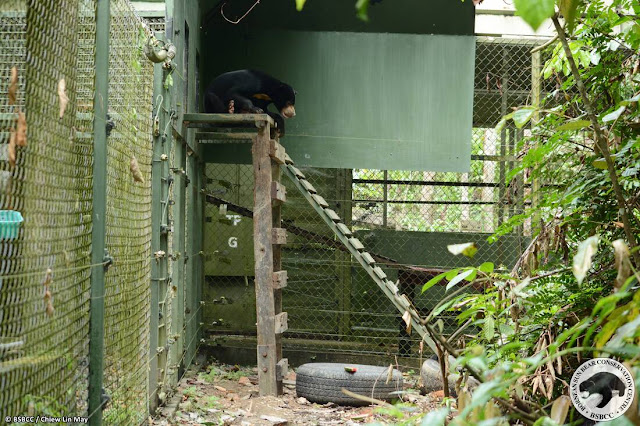 BJ still in doubt whether or not he wanted to go outside. 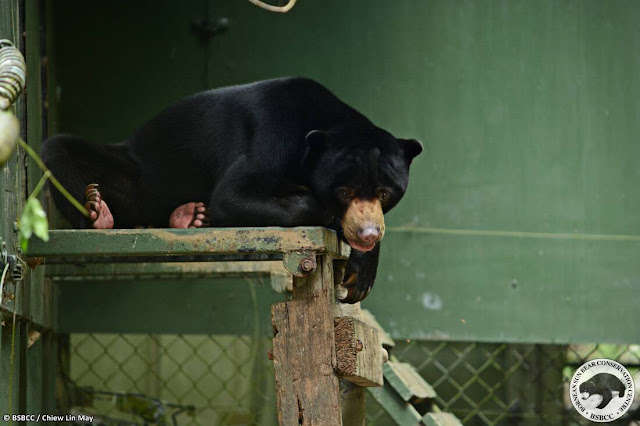 Not feeling sure enough, he just spent the entire time resting on the ramp and looking at the forest enclosure from afar. Questioning whether or not he should give it a try. 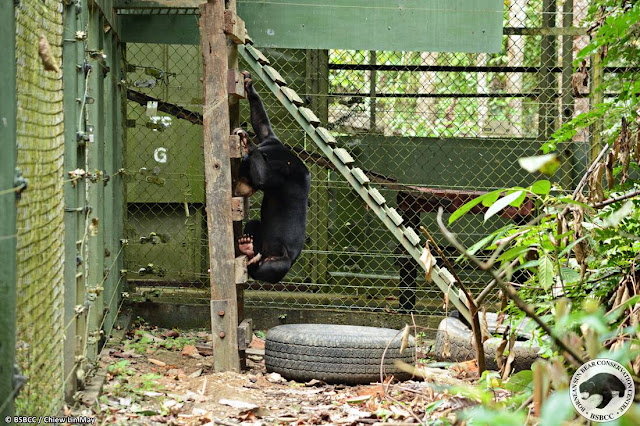 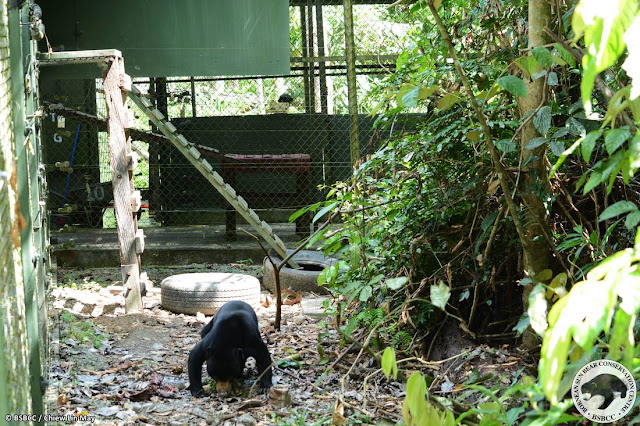 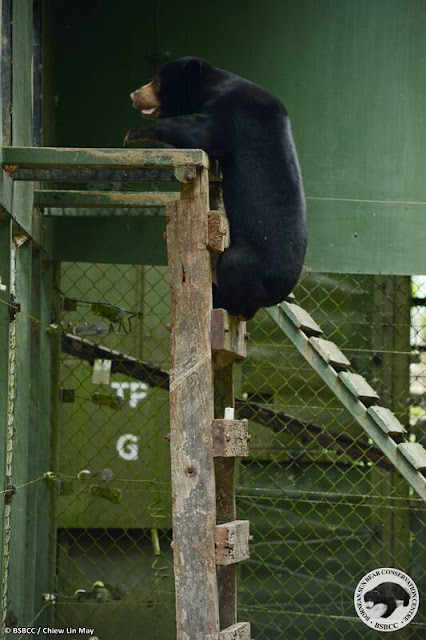 His natural instinct kicked in as he inhaled the smell of the earth. 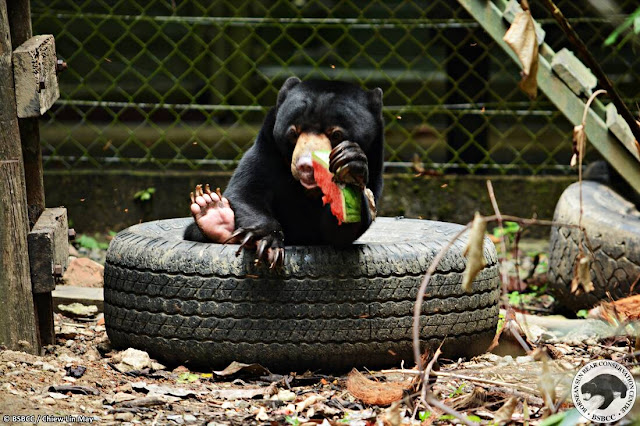 Now that he finally has begun to trust the outside world, he has no problem enjoying his delicious food in the forest enclosure.​Attempt in releasing SikaOn the first day of releasing Sika to the forest enclosure, it was really a tough one as she refused to go out, even with many trials. Food was scattered all over the place so that she had the urge to go outside. She normally stayed on the ramp and instead of pulling herself out to experience the forest enclosure on her own, she remained still. She was not curious enough to explore the outside world and apparently, she loves staying in her comfort zone. She loves staying where she feels at ease. 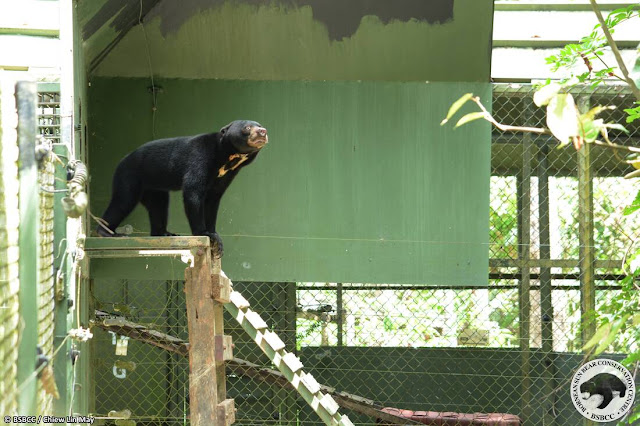 ​Battling with her own thoughts, Sika finally made a decision to go out. But the only way she got distracted and was willing to go down was when honey was applied all over the stairs. With that, she got distracted by the delicious and sweet taste. 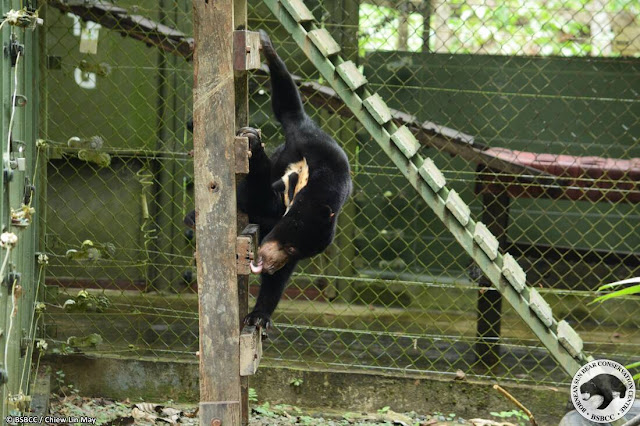 She climbed down step by step, licking the delicious honey that was in her way. What a great start she thought to herself. 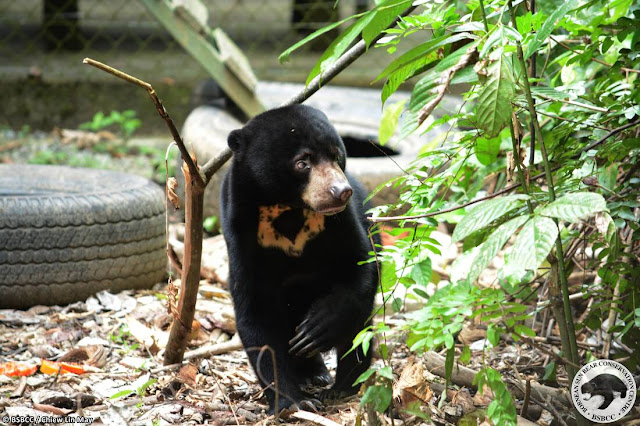 Now that she was finally out, she got super curious with her surroundings. She was pretty amazed by the new place that she was introduced to. A new home with a lot more to explore. 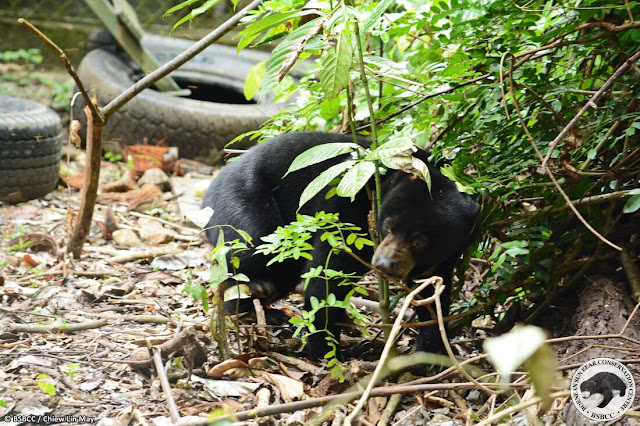 Getting super curious, she sniffed around the forest enclosure, foraging and roaming around. Then she slowly started to like the outside world more than where she used to be. The taste of freedom was now in her bones. 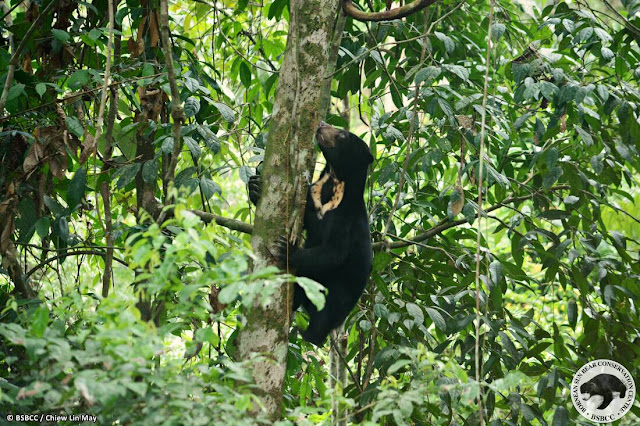 Realizing how big the forest enclosure is, Sika then gets super comfortable staying outside. Bigger space for her to roam around. Even though she took a long time to finally decide to go out compared to her two other friends, BJ and Kina, she is the one who spends a long time in the forest enclosure. There are times when she does not go back to the cage at all. Sika also loves climbing as much as Kina does, she will spend most of the time on the tree and not want to go down. Attempt in releasing SooBeing kept as a pet at a very young age makes Soo less confident to interact with the outside world. Traumatized by her past, she is less active than the rest. Days of attempting to release Soo to the forest enclosure have been difficult as she only stays on the ramp or inside the cage. Not brave enough to go out. 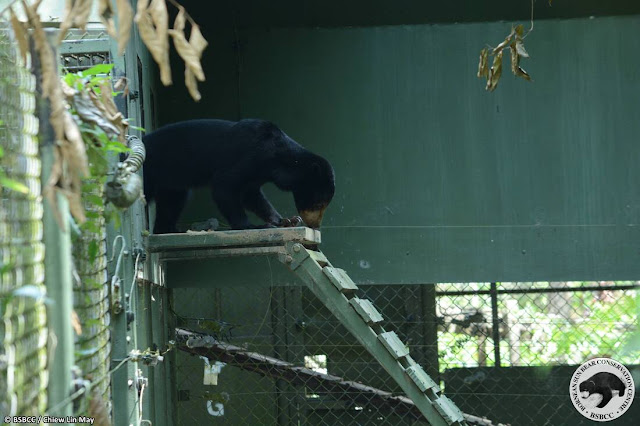 However, she still tries to fight her trauma by taking baby steps and she still tries to build up all her courage. Even though she only stays on the ramp most of the time, she is still able to witness the outside world from the cage. 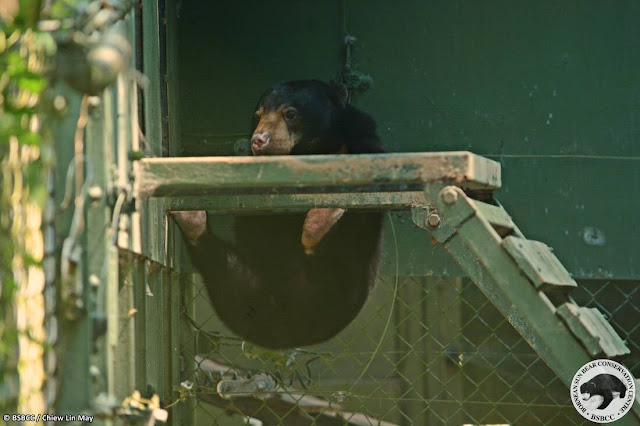 Instead of using the stairs as the trail to go down, she climbed down from the ramp. This shows that Soo is really attempting to go out. However, she still needs time to be fully ready. I hope that in the future, all of the bears, Kina, BJ, Sika, and Soo are comfortable enough to stay outside in the forest enclosure. They were kept as pets before, and being kept inside a house has now built curiosity for some of them, such as Sika and Kina. This is why when introduced to the outside world, they got so excited and preferred to stay outside. The taste of freedom excites them. However, this does not apply to BJ and Soo. Instead of building curiosity, they are in fear. Fear of what the outside world is actually like. It takes time for them to build up their trust. With that, a release to the forest enclosure is a great opportunity to give them the life that they deserve and to promote their natural instincts.
Posted by Siew Te Wong at 11:53 AM