I am humbled and honored to have been select as one of the 40 Wildlife Heroes across the world who featured in the Book “Wildlife Heroes: 40 Leading Conservationists and the Animals They Are Committed to Saving.”
Thank you the authors of the book, Julie Scardina and Jeff Flocken for your kindness to feature me and my work on sun bears in this book.
Thank you all of you who supported and helped me over the years, and keep supporting and helping on our work on sun bears.
Without your support, I would not be what I am today.
Without your help, we would not be achieving what we have achieved today.
Together we can, we have, and we will make a different!
Thank you all!

http://doppelgangerkl.blogspot.com/2012/02/rockin-4-environment-sun-bear-rock.html
Rockin’ 4 the Environment- SUN BEAR ROCK – Bornean Sun Bear Conservation Centre
Rockin’ 4 the Environment takes place from from 21 – 28 April 2012. Play a part in raising awareness and funds for the SUN BEARS. Click on the link above and find out how.
DoPPel Kafe will be hosting a flurry of music based events during that week. So we’re really looking forward to doing our part for Earth Day in April! How about you?

Bands can participate too! Click here to register your band and help us ROCK 4 the Environment!
Performers signed up to ROCK 4 THE ENVIRONMENT!
Be a part of the Earth Day revolution!
Be an advocate for the Sun Bears!
We’d like to thank every single member of the music community for participating in this awareness fundraiser! Let your voices be heard through time! Save the sun bears!
Headline acts
Rafique Rashid
Free Deserters
Jerome Kugan
Ariff AB
Amrita Soon
Beatburns
Dekya Rose
Dragon Red
Dzamira Dzafri
Fazz
Handle with Care
Idzwan Johar & The The
Instake
Kim Sng (beatboxer) Lynnzay A.
OffroadsPhlox
Ten Thousand Talents
The Impatient Sisters
THE D.I.A
The Guitar Polygamy (comprising Wani Ardy and friends)
The Outbreak
Our Sunset
ZeroPoint.0 (Comprising beatboxers Malaysia Beatbox Challenge 2010 Champion Shazet, Anowl & Nawi)
and more!
Honey bears = Sun bears! Make the world a better place! Love the Sun Bears! Not for their fur$!. Not for their paws&!. Not for their brains for soup*!. Not for their skull as decor>! Love the Sun Bears for being one of the world’s most beautiful living creatures. 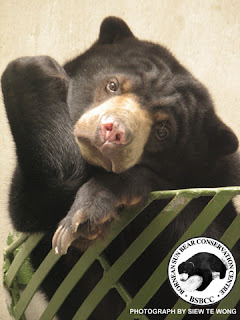 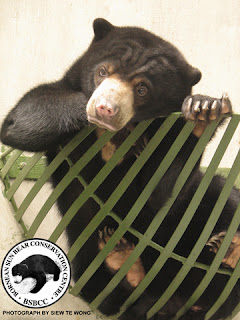 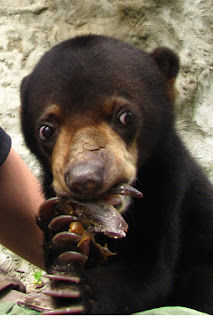 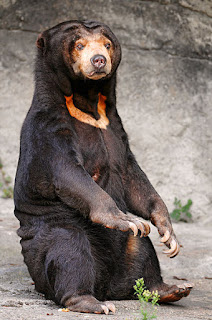 
Category: behavior, captivity, Debbie, Fulung, Mary the sun bear
Date: March 13th 2012
By: Siew Te Wong
Text and photos by Siew Te Wong
We integrated Debbie the sun bear cub with Mary and Fulung for the first time on March 10th. The entire process started 10 days earlier on Feb 28th when we moved Mary at opposite side of the hall way to the den next to Debbie. Debbie’s reaction toward Mary was very strong, huffing and barking on a defensive way whenever Mary made a move. Lack of sun bear’s communication skills, poor Mary seemed to be confused and do not know what to do except sucking her feet (Mary suckles when she wants to seek comfort). We have to keep the den between Debbie and Mary empty to reduce contact between the two young bears because of Debbie’s reaction.
The next day Debbie seemed to accept Mary’s presence. She did not seem to be defensive nor aggressive and did not bark and huff at Mary like what she did a day before. She just watched Mary on a very curious way. We let Mary entered the middle empty den so that both bears can have contacts through the bars. Immediately Debbie was very interested on Mary, touching and scratching her gently whenever Debbie can reach Mary through the bars. Sometime Mary responded to Debbie by playing with her. However, Debbie was more proactive while Mary just sitting there to suckle her feet without paying much attention to Debbie. The induction between Debbie and Mary seem fine through the bars.
The next step was to move Fulung the yearling male sun bear on March 3rd to join Mary so that three of the sun bear yearling/cubs can be place together as a group. This time Debbie did not react much to the presence of Fulung. She seemed just fine to have Fulung as her neighbor without any conflict or aggression over the following week.
Finally the big day arrived on March 10th, we integrated Debbie with Fulung and Mary. Fulung is about one year and four months old. He is the biggest and oldest among the three bears. Mary is about one year and two months old and Debbie is the youngest, age about 8 month. Here I let the photos speak for themselves:

In order to prevent them from being too excited when first meet, we scattered their fruit snack- pumpkin and banana on that afternoon, on the floor. Just like what we expected, Fulung (left) and Debbie (right) get busy searching and eating their afternoon snack: banana (preferred) first, and pumpkin later. Mary was at the back of the den, checking out Amaco (an old male bear) behind the wall.

After all the banana was gone, play time begun. Like usual, Fulung would is always advantage being a bigger bear. He shows off his dominancy by standing up right on his hind limbs. Debbie, although being the youngest and smallest, never feels threatened by Fulung's size. She displays her jaw and teeth. Her message is clear, "do not mess around with me!"

Debbie on the right now standing up to show off her teeth and claws. She just never gives up quickly!

Mary now joins them. Instead of play fighting, she is more into the remaining fruits. This is a great photo to show the facial expression of Fulung (left) and Debbie (back).

Mary (right) decided to join the party. Fulung (left) let Debbie to bite his neck. With a lot of loose skin, the neck of the sun bear is like the armor of the bear to get closer to their opponent.

Now the three bears are in action together. Although a lot of teeth and claws in these play fight, they are completely harmless to each other.Fulung and Debbie have a lot of interactions at first. Mary is a bit slow by just watching.

Like a wrestler, Fulung uses his bigger body to press Debbie down, and the countdown being…

After tens of minutes, Fulung started to feel boring and left Debbie.

Now is Mary's turn to play with Debbie (right).peI can tell by now Debbie (left) is very tired. She just wanted to lie down on her back and push Mary (right) away.At the end of the day, both bears are so tired!

Category: awareness, beartrek, BSBCC, new enclosure, Siew Te Wong
Date: March 9th 2012
By: Siew Te Wong
Text and photos by Siew Te Wong
Today’s blog is simple.
I do not need to write many words.
Because a photo worth a thousand words…. hehe..
Let the pictures tell the story..
You can see sun bears like these photo ONLY in Bornean Sun Bear Conservation Centre.


Category: awareness, behavior, BSBCC, Lawa, Siew Te Wong, sun bear in the wild
Date: March 6th 2012
By: Siew Te Wong
Text and photos by Siew Te Wong
Today as I do my routine walk in the forest enclosure of BSBCC to check on the sun bears, I saw Lawa the female sun bear climb a tree and rest on top of it. It was a dead tree full with lianas. I immediately used the Nokon sponsored D5000 and the 18-55 mm zoom lens to capture these images. Please see these photos or yourself to learn the amazing lifestyles of these bears in the tropical rainforest of Borneo.  If I have a better zoom or telephoto lenses, I am sure I will take better photos. Anybody wanted to sponsor us a longer lens?