Text by Emily Tan Yu EnPhoto by Chiew Lin May


On January 18th 2015, Montom was rescued by the Sabah Wildlife Rescue Unit from Kampung Melangkap, Kota Marudaand sent him to BSBCC on 21st of January, 2015. The story reported to the Wildlife Rescue Unit was the owner’s dog chased away Montom’s mother and she left him behind. He was taken and kept as a pet for a year in a chicken wire mesh cage and fed with human food. The owner was willing to surrender Montom to the Sabah Wildlife Department’s Wildlife Rescue Unit.We introduced Montom to the other sub-adult group and was pleased to see him get along well with all the bears. After a few years, Montom is no longer a sub-adult bear so we’re going to let him join the adult bear group and let other sub-adult bears to join in his previous group.Montom was introduced to the adult bears which included Rungus, Ah Lun, Julaini, Ah Bui and Fulung. Montom was introduced one-by-one for the first six days as he will feel surprise and afraid if he meet all the bears at the same time. At first, Montom played well with all the bears but Rungus and Ah Bui didn’t really likes to play with him as they will stay on aside or rest on the enrichment in the buffer cage. Few days later, all the bears play along with him and they’re trying learn to understand each other better even though sometimes they play rough to each other. They play around and chase each other and no aggression found during the whole integration.​Here are some photos during the integration of Montom with other adult bears. 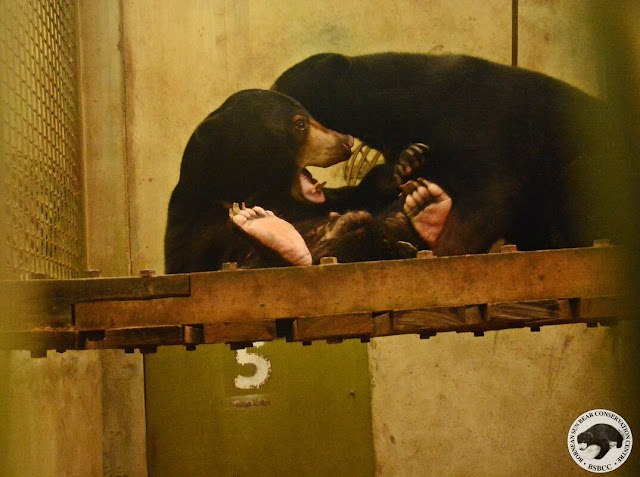 
After all the integration, we let Montom join with the adult bear group to the enclosure .They will move around in the enclosure searching for food.  Montom get to learn some surviving skills from the bears such as climbing, self-defence, digging and others. 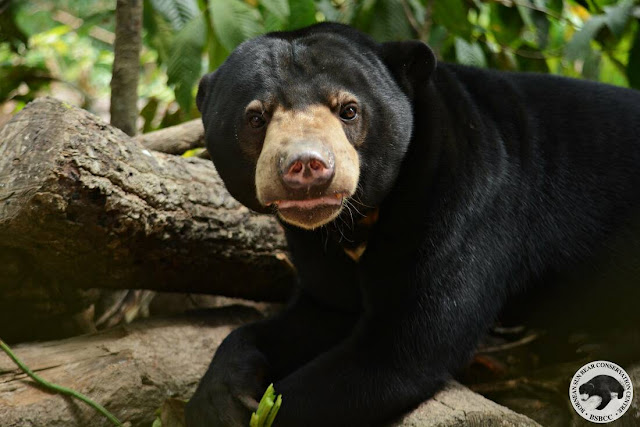 Video by Chiew Lin May


Did you know that sun bear has a long tongue?


Hey everyone! I’m Emily Tan Yu En, 17 from Penang, Malaysia and I just graduated from high school. I am waiting for my SPM results and I have 3 months before entering university. I came across this volunteering programme as my parents got to know about it from Mr Wong. Even though I’m a Malaysian, I’ve never been to Sabah before and I was really excited about this programme. I am no stranger to sun bears as I saw one in a mini zoo in Peninsula Malaysia. There are two sun bears in that enclosure and you can tell from their facial expression that they’re not being treated well in the zoo. Their enclosure is really small and they only get contact with each other. That was the first experience with sun bears.

My volunteering programme starts from 5th of January until 18th of January and there are five more volunteers at that time but I’m the only one who has a two week placement. I’ve experience a lot of first experiences throughout the project. For my two weeks in the bear house, I get to clean the cages, work in the kitchen, do enrichments for the bears and also a lot of funny moments like getting stuck in the mud after collecting banana leaves , falling in the drain because of a flood , a piece of wood fell on my foot and a lot more. I also get to build a swing for the cub with my buddy, Brandon and Leda. The volunteers from Ape Malaysia are really nice and I really had a great time with them. We played card games every night and we laughed a lot.

After finishing the two weeks volunteering time at BSBCC, I went back to Penang and soon returned to Sabah as a volunteer for as I missed it so much! Unlike January, this time there’s no other volunteer and I will be staying at the staff house ( Bjorn Hala ). I get to work in the kitchen for three weeks and also do some enrichment. I think I consider myself lucky because this time I get to work at the platform and also outreach to Lahad Datu. I get to know more about the hard work that all the staff have done for the bears and the efforts by the keepers in the bear house.

I’m really grateful that I get to work with all the staff and I am able to observe the sun bears at close quarters. They’re really cute and I’m still amazed by their size, behaviour and a lot more. I’m also really pleased that I was able to join the health check of Mamatai and Diana. I enjoyed outside feeding the most as I was able to have a closer look at the bears eating the fruit and I also get so lucky one time that I saw two bears climbing the same time.


I realised how important the staff in the centre are to the bears after working with them for 5 weeks. All the keepers treat the bears sincerely and they taught me a lot about sun bears. I appreciate all the efforts given by the staff and also all the knowledge about the bears. I also want to thank my housemates at Bjorn Hala for taking care of me and taking me everywhere around Sandakan. All the lame jokes from the keepers really help and thanks to all the keepers in the bear house for treating the bears so sincerely. I’ll sure miss the time working with all of the bears and the staff.

Video by Chiew Lin May


Bintang on her first day of arrival vs four years later.. She was rescued from an illegal house pet and was sent to the BSBCC on 15th July 2014. Today, Bintang grows up learning to be a wild bear. It takes a lot of time and love for Bintang to forget her traumatic past. ​We have two things that sun bears do not, which is the voice and freedom. Please use your voice to help them!

Video by Chiew Lin May
​Arboreal bear!!Little Logan was missing his left thumb and his left front paw has developed abnormally but these have never made give him up in climbing trees.


Joe, a three month old sun bear cub, was found by a person alone in the forest at Kg.Kipaku, Tambunan. The person then sent the cub to Lok Kawi Wildlife Park on the 12th of April 2018. The bear arrived on the 22nd of January 2019. We believe that Joe was stolen from his mother in the wild. Joe appeared tame and would suckle his hind paws which are believed to be a result from being kept as a pet for long periods in captivity. He needs to learn all the skills he will require to survive in the wild – skills that he would have learnt from his mother. 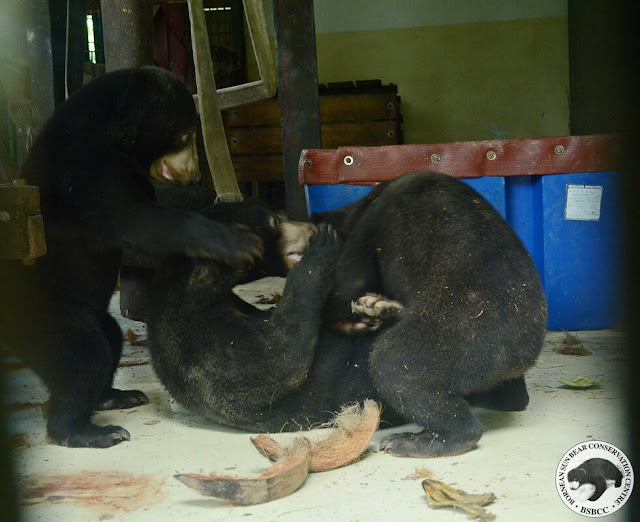 We decided to introduce Joe with two resident cubs. 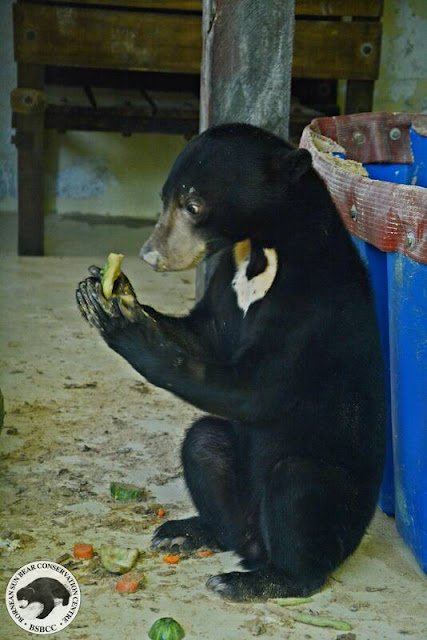 Joe recently completed his quarantine period. He is now one year old and weighs 22kg. On the 22nd of February 2019, Joe made his first new friends! 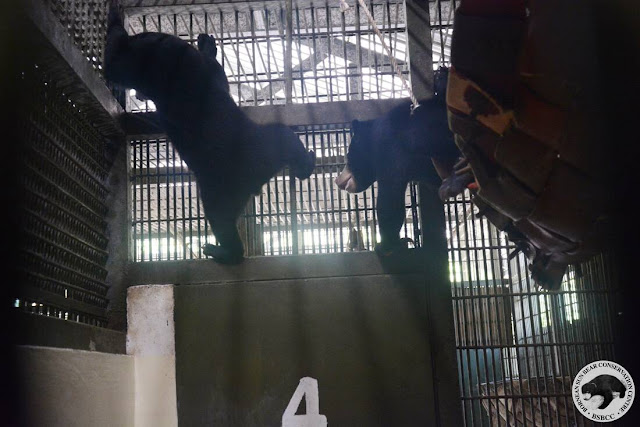 Once Joe entered the den, Logan and Romolina started to greet him by growling! 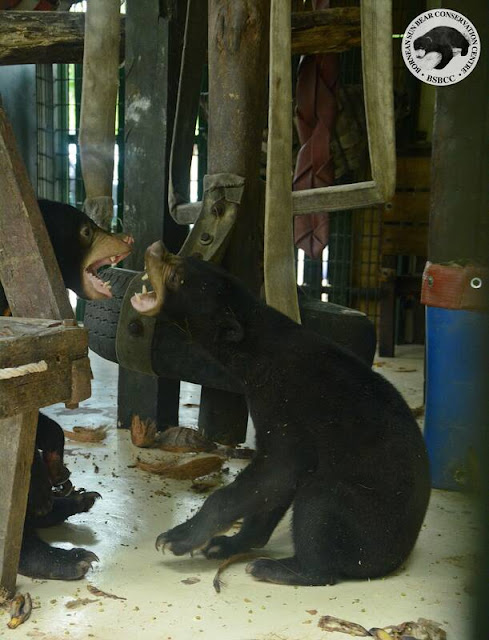 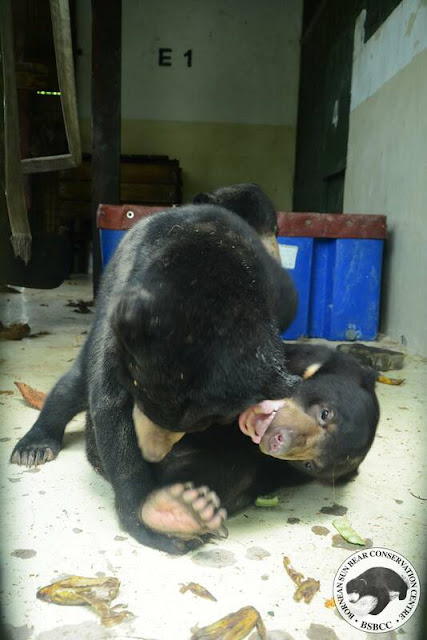 Both started sniffing around while Joe was busy with exploring the new den first. Once the door opened, Logan started to play fight by biting and rolling with Joe. 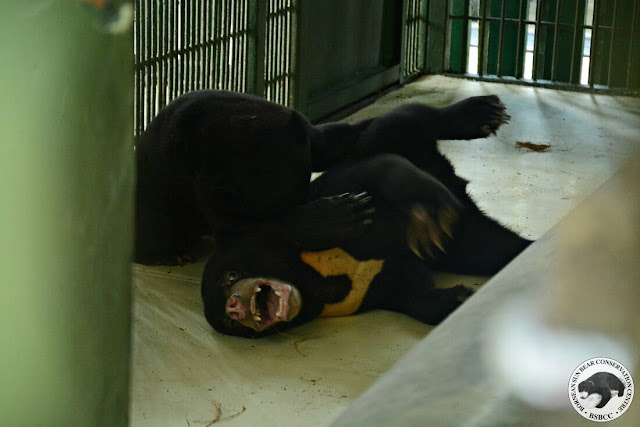 Logan has shown to be a more fun-loving bear that always initiates play with Joe. 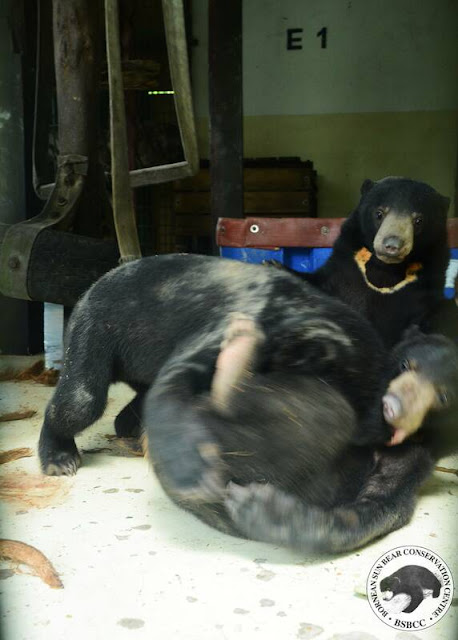 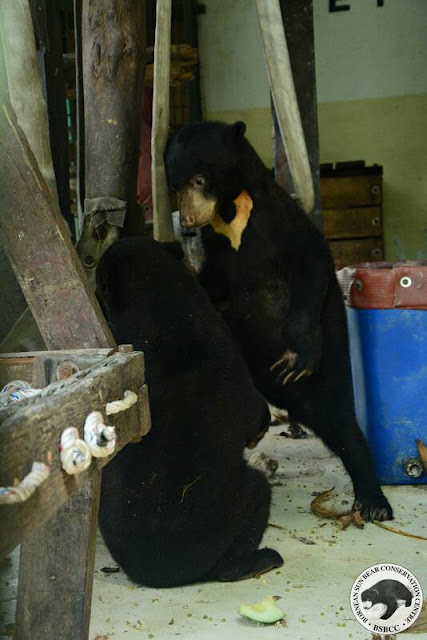 They can wrestle for hours and hours…nonstop PLAY!!
Logan began spending more time with Joe while Romolina always seemed curious and she would paw Joe in a gentle way. Romolina would still like to maintain her independence and is less interested in joining to play. We found Joe being hugged by Logan when they met. 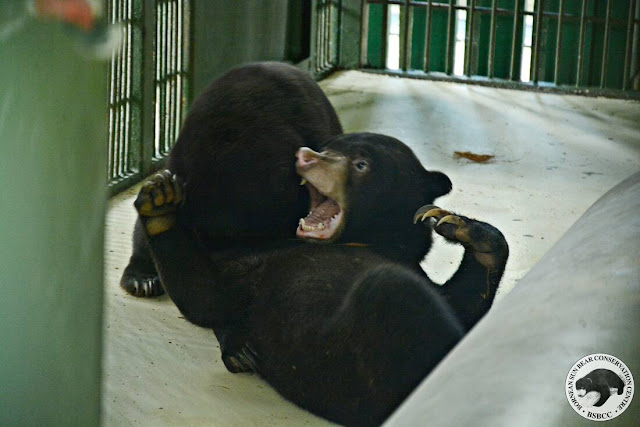 Joe has had a new experience by learning how to defend himself during play fights and wrestling.

We are glad to see Joe has been having a good time with his new friends, Logan and Romolina. These three bears have a close bond and share their food or enrichment together too. Little Romolina and Logan were quick to accept Joe. 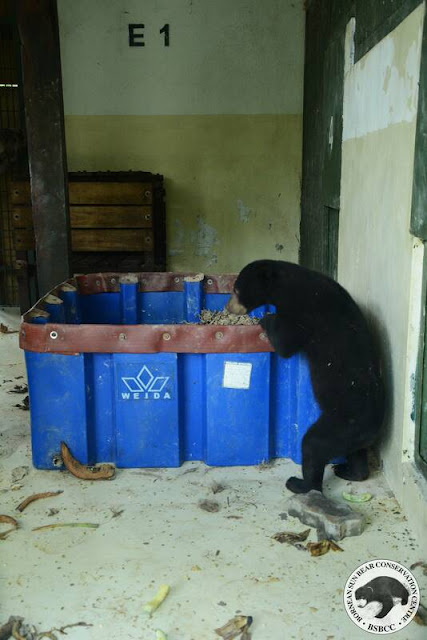 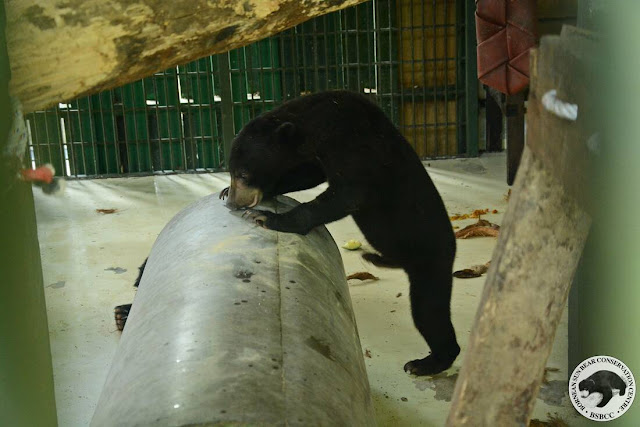 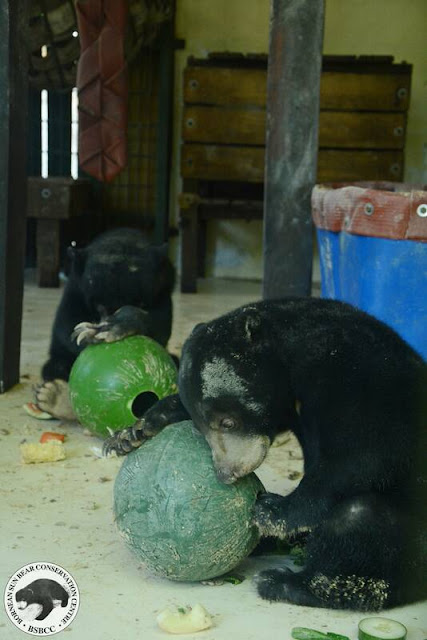 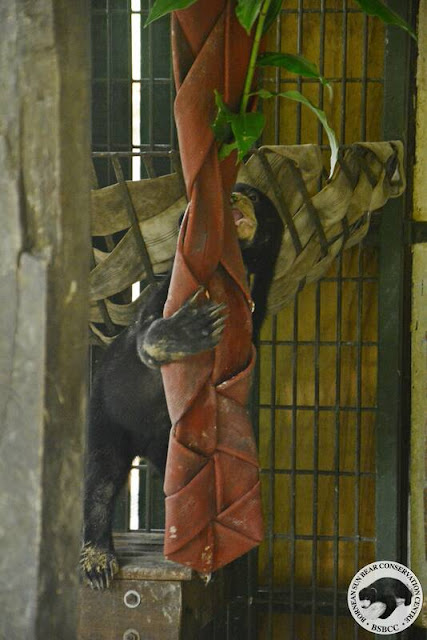 The three bears have been venturing out to the larger exercise dens which are filled with different types of enrichment. 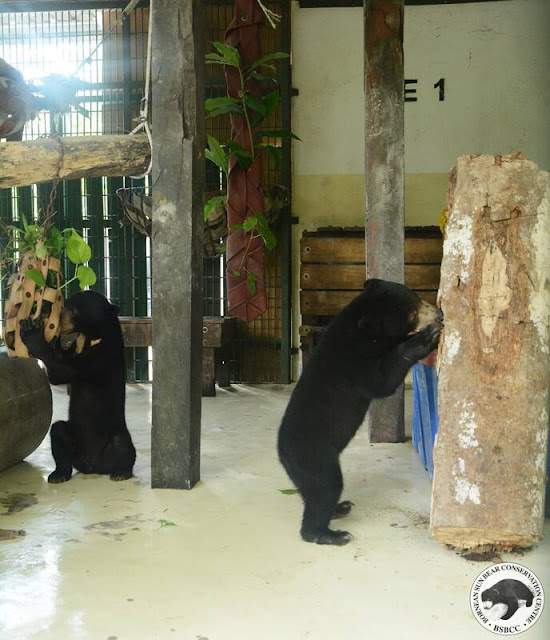 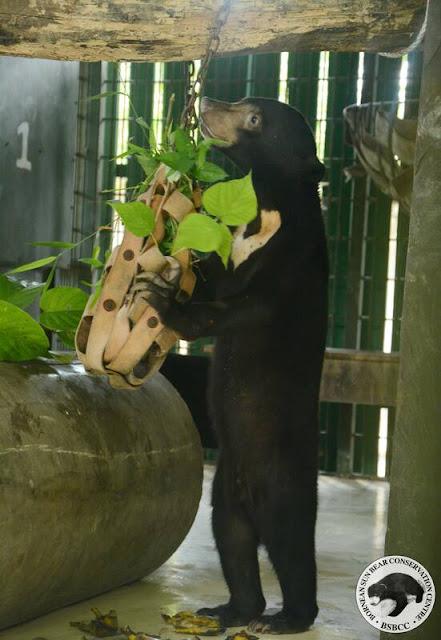 They share their dens which can enrich Joe’s life and help stimulate his natural behaviour. 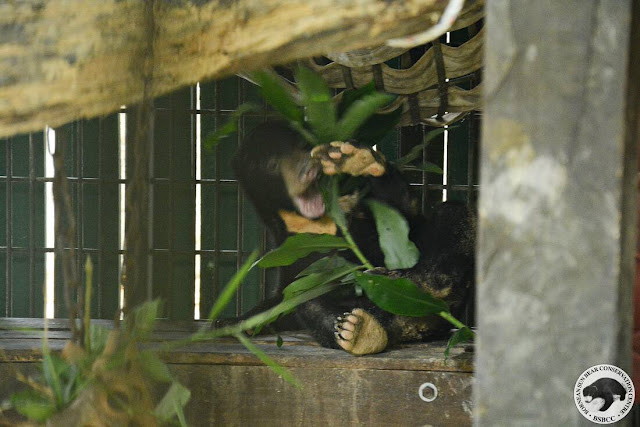 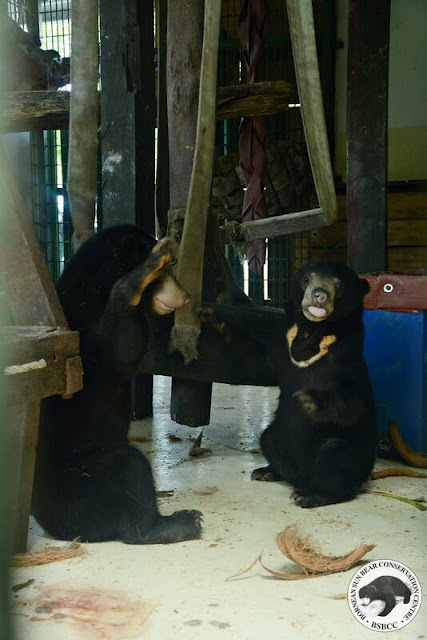 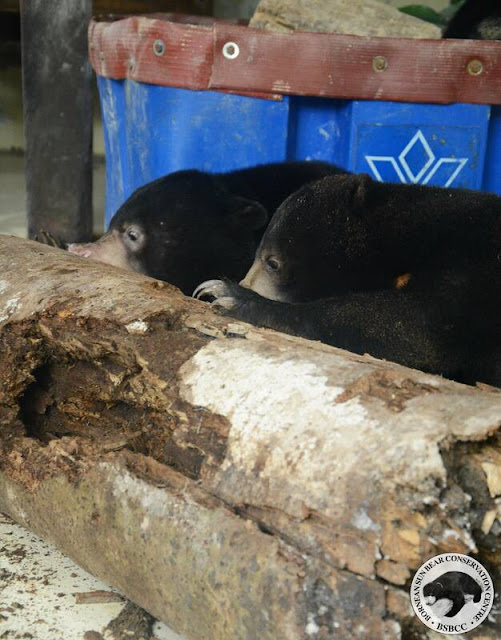 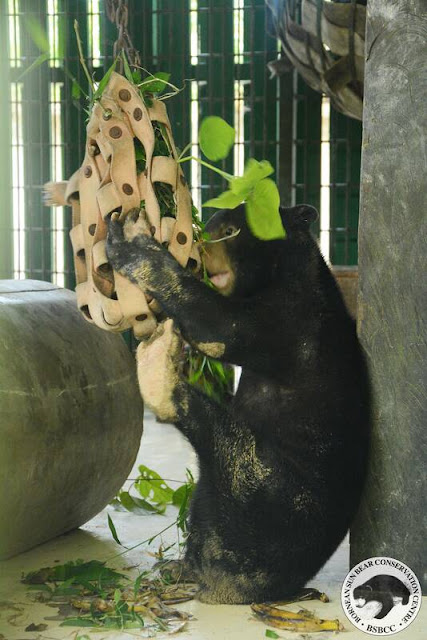 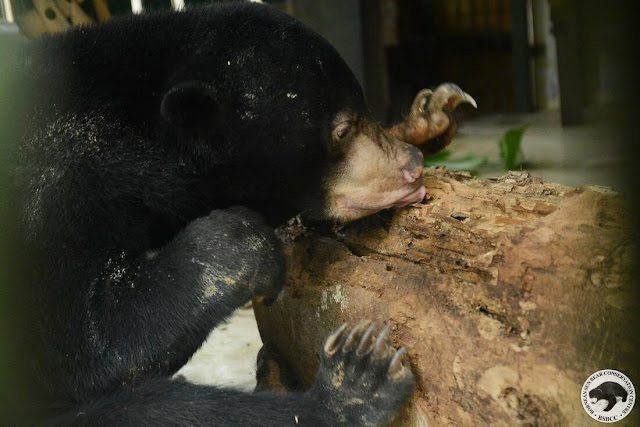 They enjoy playing, exploring and making us fall in love with their beautiful smiles! ​This is important for the rescued bears to help them recover from trauma and start to put their past behind them.​Interactions between Joe, Logan and Romolina have shown to be positive. Joe now has a place full of love. Hopefully, this relationship can help Joe become a more confident and stronger bear!
Posted by Siew Te Wong at 8:32 AM No comments: