We need your helps to protect wildlife in Malaysia

Dear friends,
If you reading this blog, you are no doubt a bear lover, an animal lover, a naturalist, a biologist, a conservationist, or just a regular people who care about our nature, wildlife, and mother Earth. You cared, concerned, and I thank you for that.
Now I would like to ask you for a favor. I am not asking you to donate money this time, but I would like to ask you to sign a petition that will help improve our wildlife law in Malaysia. Please read more about this petition at the press release below and sign the petition at http://www.petitiononline.com/MYLaw/petition.html.
Now I have my own stories to tell why this petition is important. I want to show you some photos and tell you the stories of many wildlife were killed and poached because our wildlife law need to be strengthen. By strengthening the law, we hope the awareness and enforcement of these law will be improved and benefit both wildlife and human. I apologize for showing photos but I think we all need to know that this kind brutal killing is happening in this country and it has to be stop by any mean. Although habitat destruction is by far the most important threat to the wildlife in Malaysia, poaching and illegal killing of wildlife can easily wipe out the small local population of the wildlife that are living in the fragmented landscape. 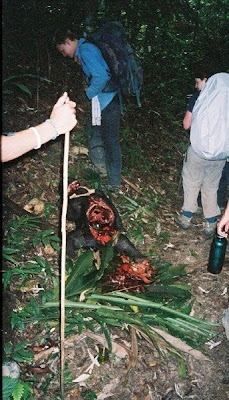 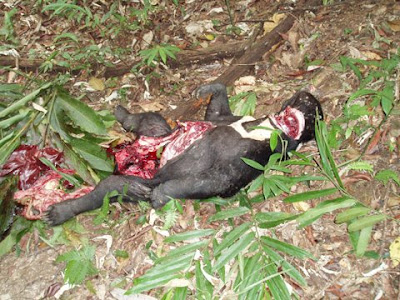 This sun bear carcass was found beside a hiking trail after being freshly slaughtered and only the gall bladder being removed by the poacher. According to the local guide, the poacher sold the gallbladder for about US$100. (Photo: Sue Chong) 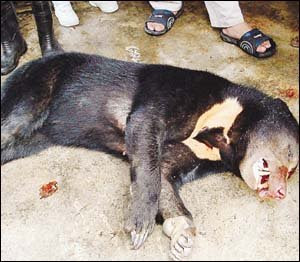 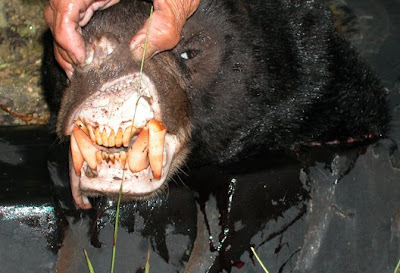 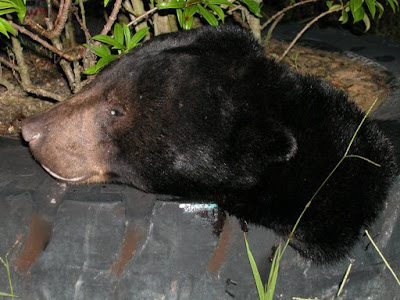 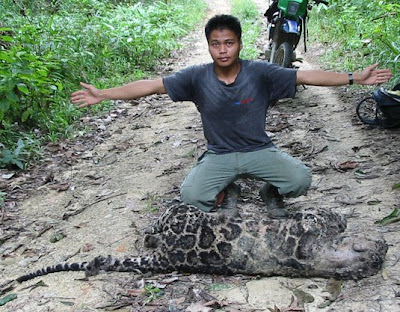 Remmy, one of my former research assistant, found a dead Sunda clouded leopard at our study when he tracked one of our radio-collared sun bear. Poacher shot his large male clouded leopard that are so rare in close distant and discarded the body. Sometime poachers killed animals for no reason. Again, this incident shown that the wildlife law and enforcement needs to be strengthened, as well as education and conservation awareness needs to be promoted. 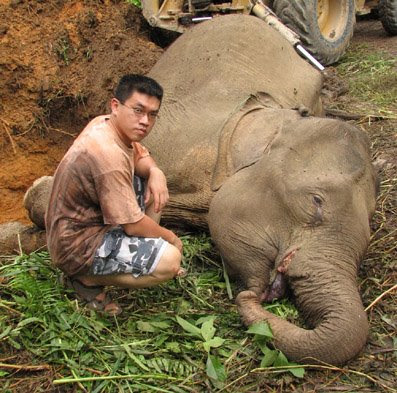 You have to see this to believe this. This female Bornean pygmy elephant were probably killed by “slow death”- infection that led to gangrene from the at least 13 bullet wounds I counted at her back site. Poachers simply shot this magnificent animal for no reason, or, for fun? I will never get it why in the world would people wanted to do this kind of killing! She was drop death by the road site in my study area. I wonder how many animals that were killed for no reason and poached for a reason were left unnoticed. I strongly believe that what we are seeing and hearing may represent a tip of an iceberg. There are many more animals being killed out there! 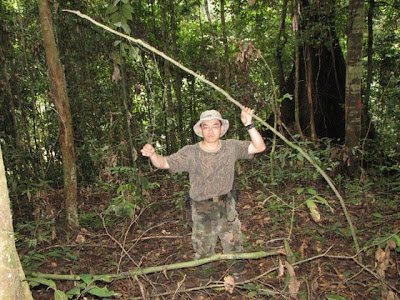 Snares are by far any wildlife and conservationists’ nightmare. Snares are easy to make and set, cheap, light to carry, and most importantly, they are effective! You will be amazed with how similar the mechanism of snares across different continents in the world and low long human have been using the same kind of design for snaring wildlife simply because they works. In order to increase the efficiency of these snares, most hunters or poachers would construct a simple fence on the forest floor for kilometers and left little “gap” or “opening” where the loop of the snares is set. When an animal traveling on the forest floor and come across the fence, they tend to follow the fence and funneled to the little gap and they try to across the fence through that little opening where poachers already set the deathly loop on the floor awaited for their kills. As you can imagine, these snares are set by hundreds as they are cheap and easy to carry into the forest interior. What make snares a true nightmare for everyone who care about wildlife is that they do not discriminate what species of wildlife can be their next victim. Willdife as small as a pheasants, mousedeer, pangolins, civets, muntjacts, wild boar, deer, bears, and all the way range to large mammals like rhinos and elephants are some of the common victims of snares. 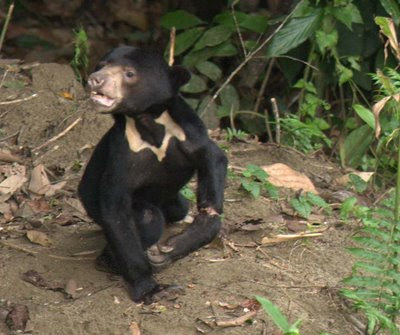 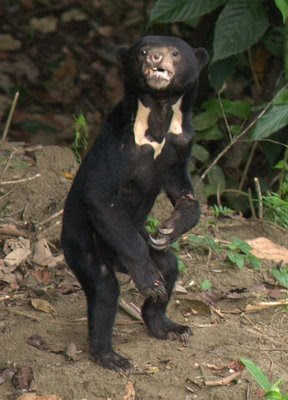 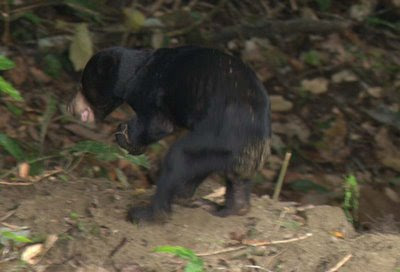 These three photos are photos of a snared sun bear in my study area in Sabah. The bear managed to struggled and cut himself lose from the snare but suffered severe injuries: the heavy duty nylon fishing line cut through his arm, and he also suffered from a dislocated shoulder as a result of struggling to break free. The survival of this bear was probably very low. You can read more about this bear at: http://wongsiewte.blogspot.com/2008/03/plight-of-wild-sun-bears.html 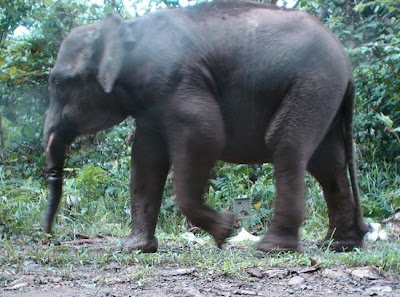 A camera trap set along old logging road in my study area photographed this Bornean pygmy elephant. A closer look at the elephant trunk revealed this elephant was a victim of snares. His trunk has a snare that cut a big opening about half way of her trunk. Chances of survive for this unfortunate elephant is low with a trunk that has a hole on it. She probably cannot drink properly and take food by her trunk. (Photo: Andy Hearns and Joanna Ross) 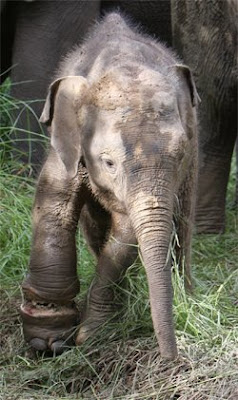 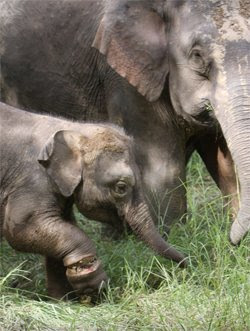 It is always emotional when injuries involve a baby regardless of species. Here is a baby Bornean pygmy elephant fall victim to a snare at the river bank of Kinabatangan River, the longest river in Sabah, Malaysia Borneo. The injured baby elephant with its mother. Dr. Senthilvel, Chief Vet from Sabah Wildlife Department said the baby elephant was unlikely to survive. “As the severity of the wound on this elephant is so serious, this poor baby elephant would very soon succumb to gangrene and die. The sad thing is that even an attempt to rescue it and bring it in for treatment would probably mean amputation of the limb and a life in captivity. It would be all too cruel to have it live on and suffer in captivity, with a handicap like that.”These photos were taken by Inada Nobuhiro, a Japanese wildlife guide and lecturer. To learn more, please visit http://news.mongabay.com/2008/1012-elephants.htmlSad…
So, please click http://www.petitiononline.com/MYLaw/petition.html to send your petition in order to help us strengthen our wildlife law and help protect out wildlife. This is the first step. This is the must do step!

JOINT PRESS RELEASE
28th September 2008
Malaysian Nature Society
TRAFFIC Southeast Asia
Wildlife Conservation Society
WWF-Malaysia
Better Law for Wildlife in Malaysia:
Petition to amend the Protection of Wild Life Act 1972
Petaling Jaya, Selangor (28th September 2008)-Today, the world celebrates International Tiger Day, a celebration of the tiger in its wilderness. While we celebrate its strength, beauty and perseverance, today also presents the ideal opportunity to mark our commitment to save the Malayan tiger
Currently, tigers and other wild animals in Peninsular Malaysia are protected by the Protection of Wild Life Act 1972. This 35-year-old law is severely outdated and riddled with loopholes. There is a serious need for the Malaysian government to remedy the loopholes and beef up the law, as many species continue to be poached and illegally traded at alarming rates. Wildlife offenders often escape arrest, prosecution and punishment. We understand that the government is in the process of revising this law. However, we urge the government to seek public input in this process. Examples of amendments needed;
i)That all products containing or claiming it contains parts of totally protected species to be made illegal;
ii) That mandatory jail sentences and stiffer fines are imposed for serious wildlife offences. Help us reach the target of 100,000 signatures for our Malayan tigers. Your voice to this petition will make a difference, for tigers and other wildlife in Peninsular Malaysia.
Sign this petition at http://00000138/www.petitiononline.com/MYLaw/petition.html
———————————————————————-
Dear Supporters, Colleagues, and Friends:
The lack of urgency has become a norm. I am asking you personally to take two small actions today towards creating a better world for the wildlife in Malaysia by signing the petition below. That’s the first step. http://www.petitiononline.com/MYLaw/petition.html
Once again, four prominent wildlife and nature NGOs* in Malaysia came together to call for better law for wildlife in Peninsular Malaysia. Please support these NGOs and forward the Press Release sent to you earlier today to your friends and colleagues who may or should support this cause- at least ten of them and ask them to do the same. That’s the second step. There were less than 100 signatures last week. The goal of 100,000 signatures seem impossible. Using our networks effectively is the only way. There are about 200 members on this list. If each one of them forward the PR to at least 10 people and these people forward to further 10 people, we can reach out to at least 20,000 people worldwide. Possibilities are endless. Some may put it up on a personal blog site or webpage for a greater impact. Others can raise the awareness over this issue and call for action by hosting a company lunch, school project, media campaign, public awareness event,etc. etc….even over a family dinner tonight! All depends on how much you care. The chain of actions starts with us today and our wildlife deserves our caring effort. Their situations are becoming desperate. PLEASE HELP.
Kae
* The NGOs behind this petition are: Malaysian Nature Society, TRAFFIC Southeast Asia , WCS Malaysia Programme, and WWF-Malaysia.
Posted by Siew Te Wong at 11:23 AM 2 comments: