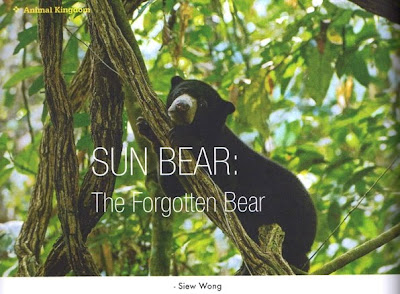 This is a new article that I wrote for Society & Environment-A monthly magazine published by Zayed International Prize for the Environment (www.zayedprize.org.ae) what base in Dubai, United Arab Emirates. It was published in the July 2009 issue. Special thanks to Ms Seema Sangra, the Editor and the Art Director of the magazine for publishing this sun bear article. 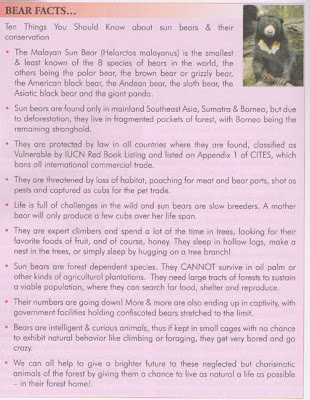 Race to save tiger?s limb


Race to save tiger?s limb

Shared via AddThis
MALACCA: The badly wounded male tiger rescued from a poacher¡¦s snare is being treated at the Malacca Zoo in the hope of saving its injured limb from amputation.


Rescue mission: Wildlife authorities preparing to move the injured tiger caught in a poacher¡¦s trap for treatment in Perak on Saturday. ¡X AP

¡§It is too early to tell whether the wound will respond to treatment as it is quite deep and bad,¡¨ he said yesterday.

Perak wildlife authorities rescued the 120kg tiger on Saturday afternoon after receiving information that the animal had been found trapped in the Royal Belum Forest Reserve.

The animal was given treatment in Perak and was sent to the zoo here on Sunday night for further treatment.

Zainal said a final decision would be made next week to determine whether amputation would be necessary to prevent the wound from becoming fatal to the animal.

Whatever the outcome, the tiger would be in quarantine at the zoo for a month before a decision is made as to where it should be, he said, adding that it is likely to be kept at the zoo here.

Apart from the wound, he added the tiger, between five and seven years old, was in prime condition.

He said this is not the first time authorities had been called in to rescue and treat snared tigers.

¡§We managed to save two tigers and a tiger cub in Grik, Perak, in the 1980s that had also suffered snare wounds,¡¨ he added.

A well known case involved a male tiger named Harimau Puchong. Its one limb was amputated after it was rescued from a snare in 1987.

Despite having only three limbs, the tiger went on to become one of the zoo¡¦s most prolific breeders under its tiger-breeding programme.