How One Man is Saving The Rare Bornean Sun Bear


Amidst the lush rainforest of Sabah, orangutans swing through the forest canopy, hornbills sail overhead and Borneo’s distinctive Proboscis monkeys congregate by the riverbanks. But there’s a far less known endemic species that’s recently been receiving more attention, thanks to the opening of the Bornean Sun Bear Conservation Centre, founded by conservationist Wong Siew Te.

“Sun Bears are such a special animal from head to toe,” Wong says passionately, “When I build up a relationship with our rescued orphan sun bear cubs, they trust me 100 percent and treat me like their real mother. This feeling is so precious, yet very sad for the bears.”

“SUN BEARS ARE SUCH A SPECIAL ANIMAL FROM HEAD TO TOE. WHEN I BUILD UP A RELATIONSHIP WITH OUR RESCUED ORPHAN SUN BEAR CUBS, THEY TRUST ME 100 PERCENT.”
Hailing from Malaysia, Wong first became interested in sun bears while studying at university in the United States, so on returning to his home country he started to undertake his own fieldwork on the nation’s rare sun bears. It was at this time that Wong realised the importance of protecting this species.
“I learned that many sun bears were being kept in captivity,” he explains, “all of these captive sun bears suffered tremendously. I felt their stress and fear when I saw them locked in small cages. I felt so sorry for these animals and became concerned with their welfare and future.”

Over in Sabah, Wong set out to create a charity and conservation centre that could protect Borneo’s endemic sun bear.

Overcoming the challenges of funding such a big project, Wong founded the conservation centre alongside the neighbouring Sepilok orangutan sanctuary, and since January 2014 it has been open to the public.

“When we’re walking the rescued orphaned sun bear cubs in the forest, we act like their mothers. They trust us with all of their heart and are totally dependent on us for their future. I often say to myself, what could be more meaningful than helping these poor little creatures.”

The centre focuses on the welfare of the rescued sun bears, and the bears’ eventual rehabilitation into the wild, as well as education and research. “We provide a proper facility to house and care for sun bears that have been captive,” Wong explains, “In short, we improve their welfare and their living conditions that were once very poor.”

“SUN BEARS ARE THE LEAST KNOWN OF ALL BEARS, SO MANY PEOPLE AREN’T AWARE OF THEIR PRESENCE IN THE FOREST AND THEIR CONSERVATION STATUS.”

“The very first step to conserving sun bears is to educate the public of the bears’ plight. Since sun bears are still the least understood bears in the world, we hope the centre can be an important hub for sun bear research.”

After being kept in quarantine for 30 days and having their health checked, the bears are free to move to the bear house where they start the integration process, before being released into the natural forest enclosure.

Ultimately, the centre hopes to release each bear back into the wild. “Sun bears belong in the wild and not in captivity, so we would like to give the bears a second chance.

Visitors to the centre have the opportunity to see these sun bears in their natural environment, from an observation platform. “This is unique,” Wong says, “because sun bears are very difficult to observe in the wild. They are very rare and shy, and they live in dense tropical forest. Here, visitors can observe, photograph, and video their natural behaviour in the forest enclosure, and sometimes see the bears climb as high as 40 metres above the ground.” Around the observation platform, guides are on-hand to talk about the sun bears.

“SUN BEARS BELONG IN THE WILD AND NOT IN CAPTIVITY, SO WE WOULD LIKE TO GIVE THE BEARS A SECOND CHANCE.”

Wong concludes: “I hope more and more people learn about these bears and their plight, and take more action to help them. And I hope that people no longer harm the bears or damage their habitat. I hope more people can support the work we do to protect sun bears, as well as their rainforest habitat.”

Find out more about the Bornean Sun Bear Conservation Centre and make a donation through the charity’s website.
Posted by Siew Te Wong at 4:21 PM No comments: 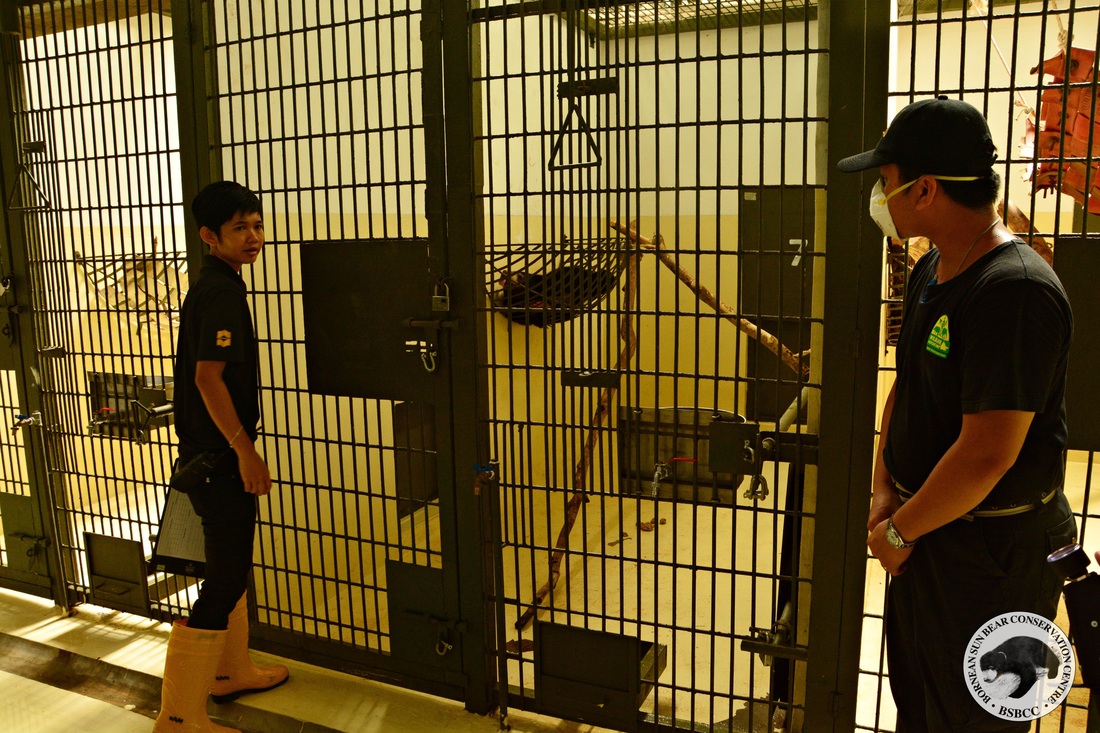 Chin finished her quarantine period and was moved to bear house where she will start her brand new life!

Chin, a 13 year old adult female sun bear arrived to BSBCC from Lok Kawi Wildlife Zoo on July 22, 2014. Chin was rescued from the primary school’s mini zoo in Tawau, a town in the southeast region of Sabah. We are happy to report that Chin has successfully completed the quarantine period and has been moved into the bear house to live with other bears her age.  On October 20, 2014 two veterinarians from the Sabah Wildlife Department, Dr. Laura Benedict and Dr. Timothy Fong, teamed up with our sun bear team to help in the moving process. 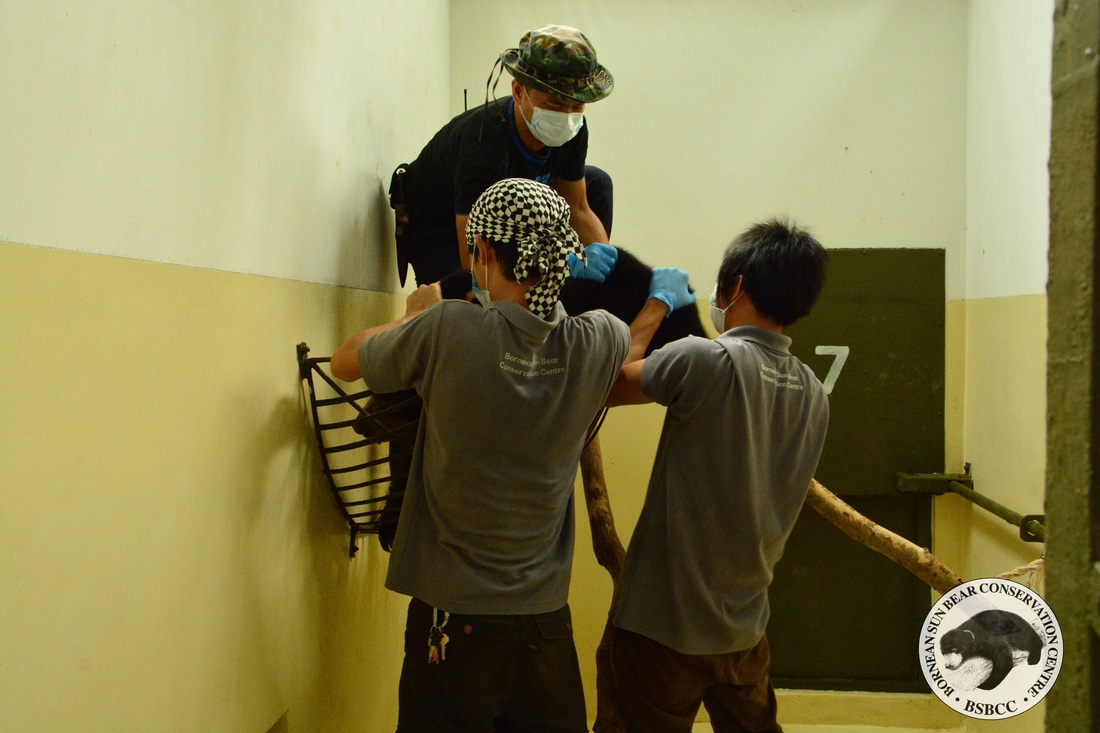 After the sedation procedure, Chin was carried out of her den and put into the transportation trolley. The trolley then moved Chin from the quarantine area to the bear house. Every bear that is being moved undergoes routine check-ups during the transport. Chin’s weight, blood, and hair samples were tested to ensure general health and organ functionality. She weighed in at 35kg and showed a bit of hair loss on both forelimbs. Dr. Laura suggested that Chin take a supplement to help her adjust. 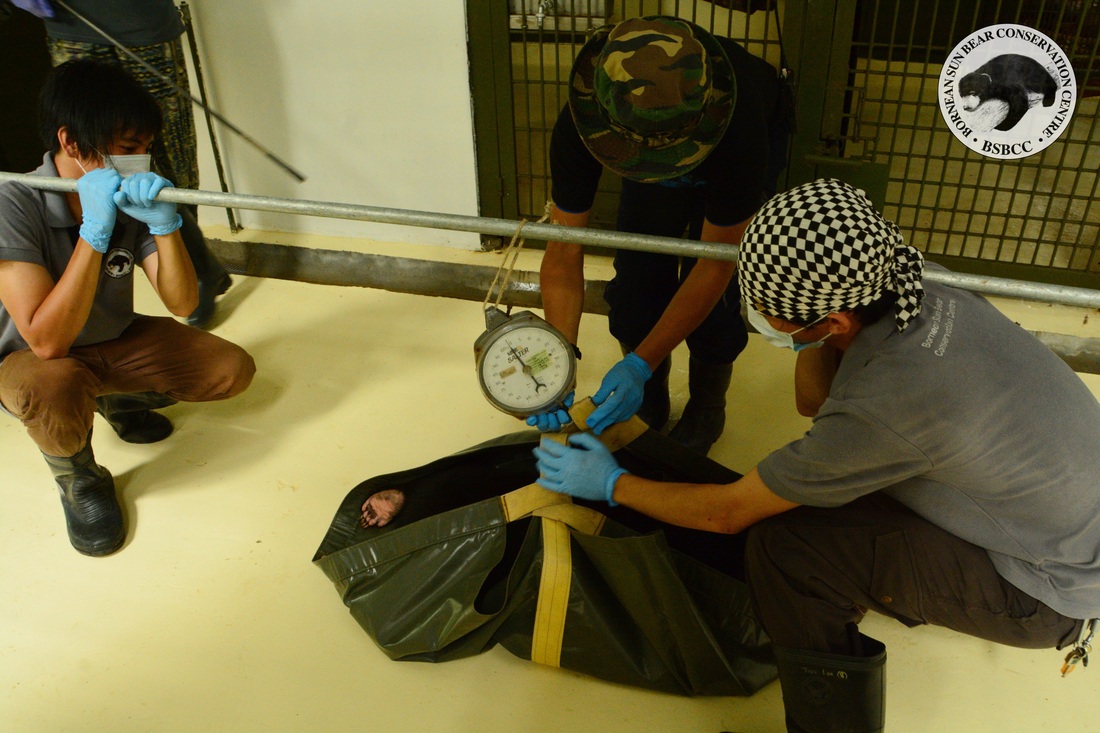 While under sedation she was weighed. 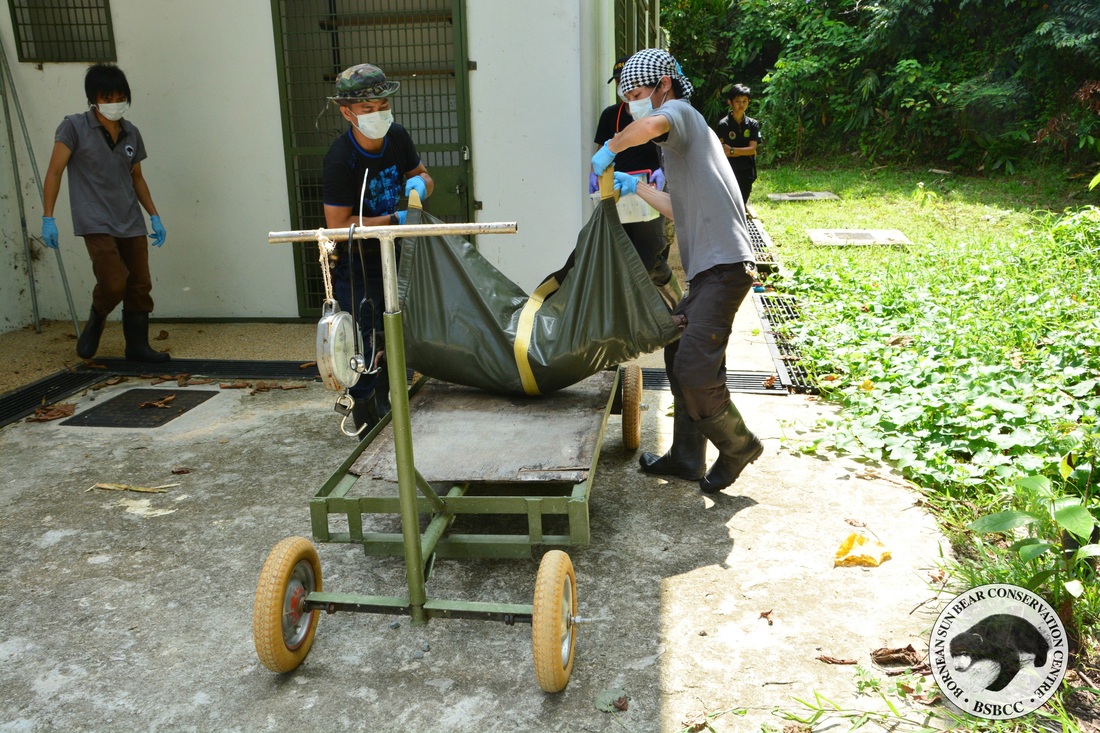 The first step to her freedom was to move Chin from the quarantine which requires a general anesthetic and a transfer trolley to her new home situated at bear house. 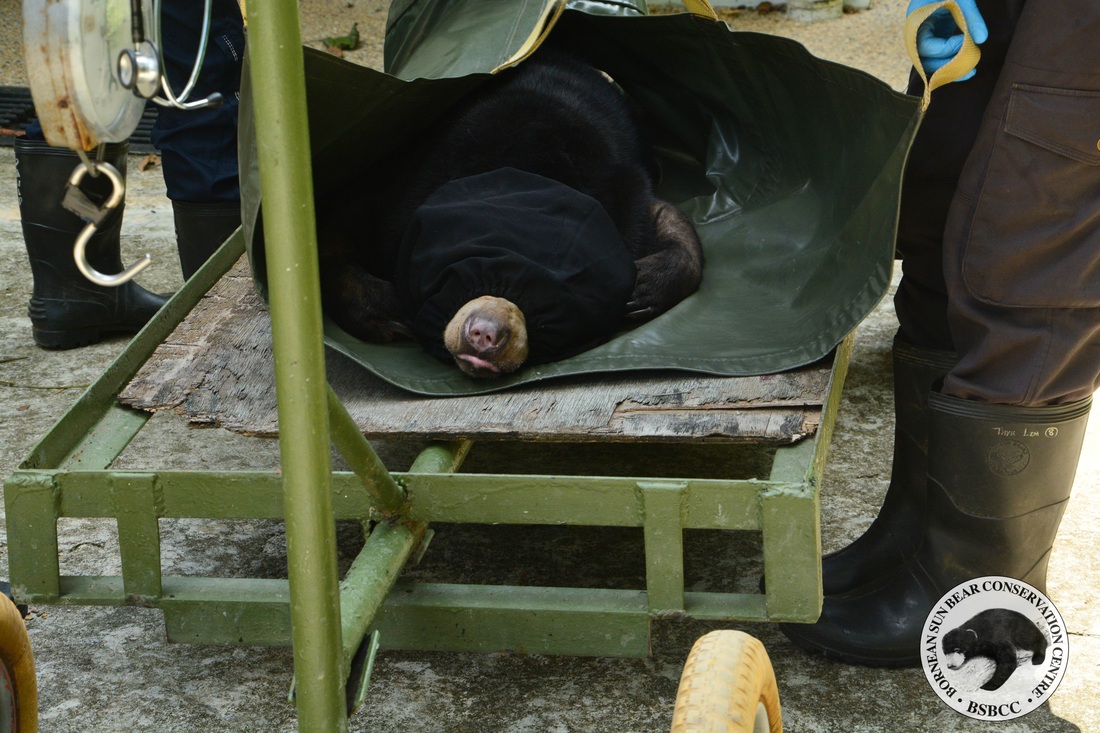 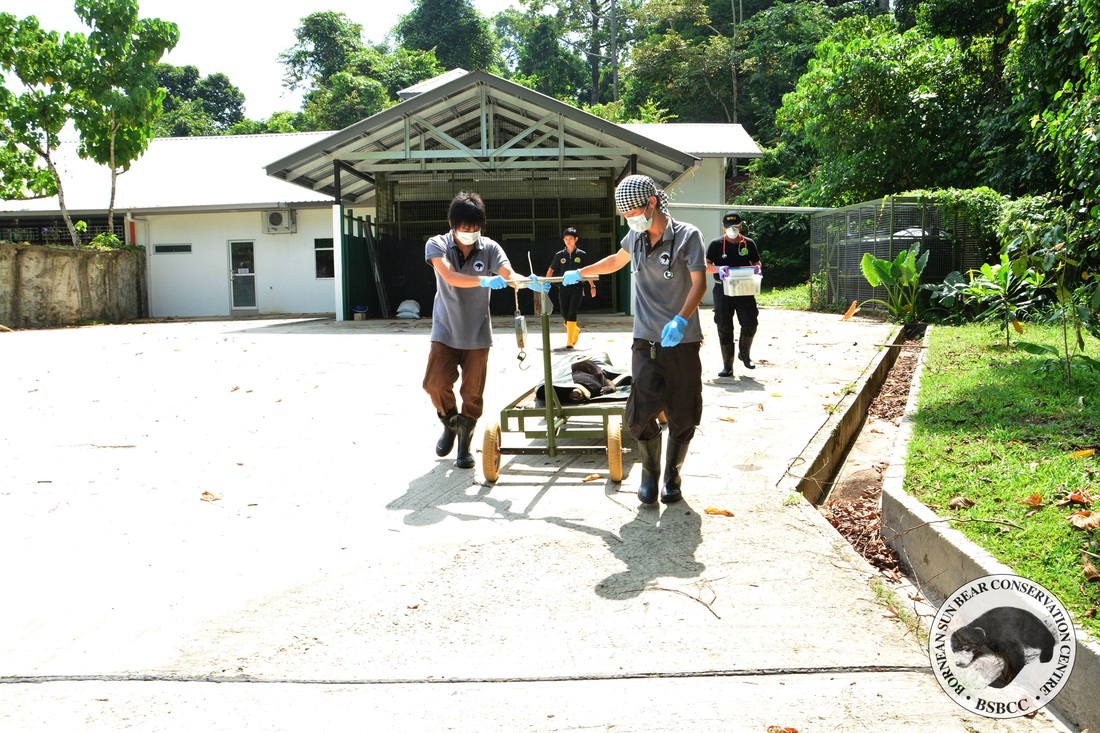 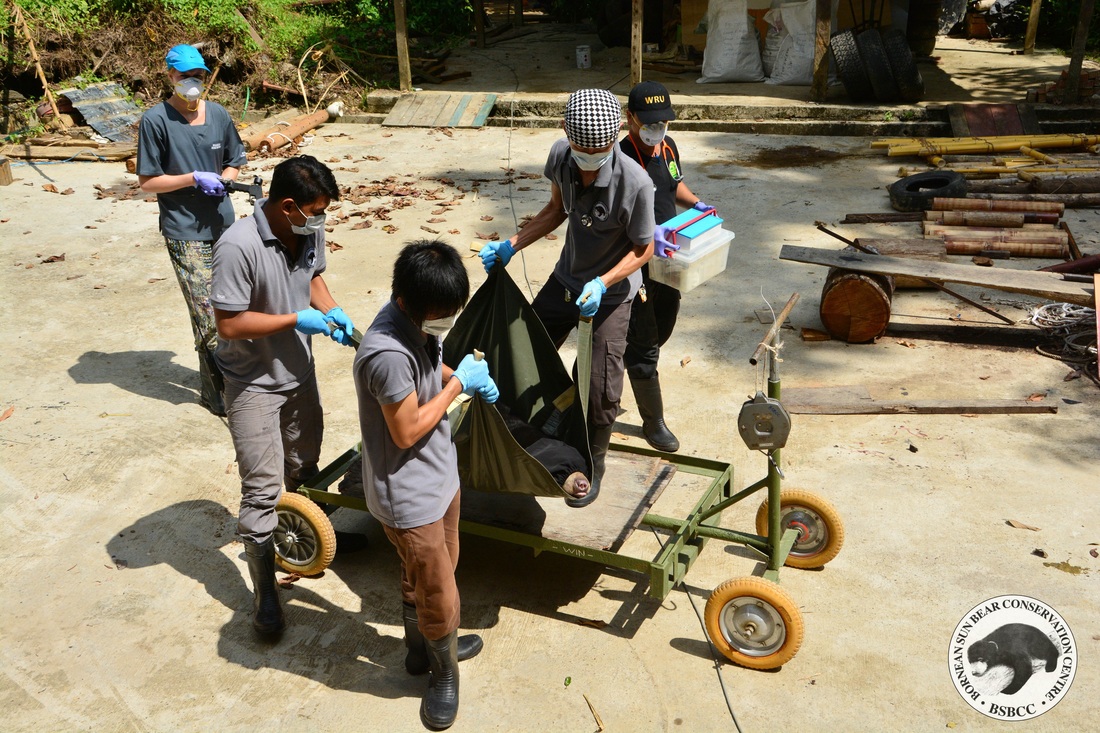 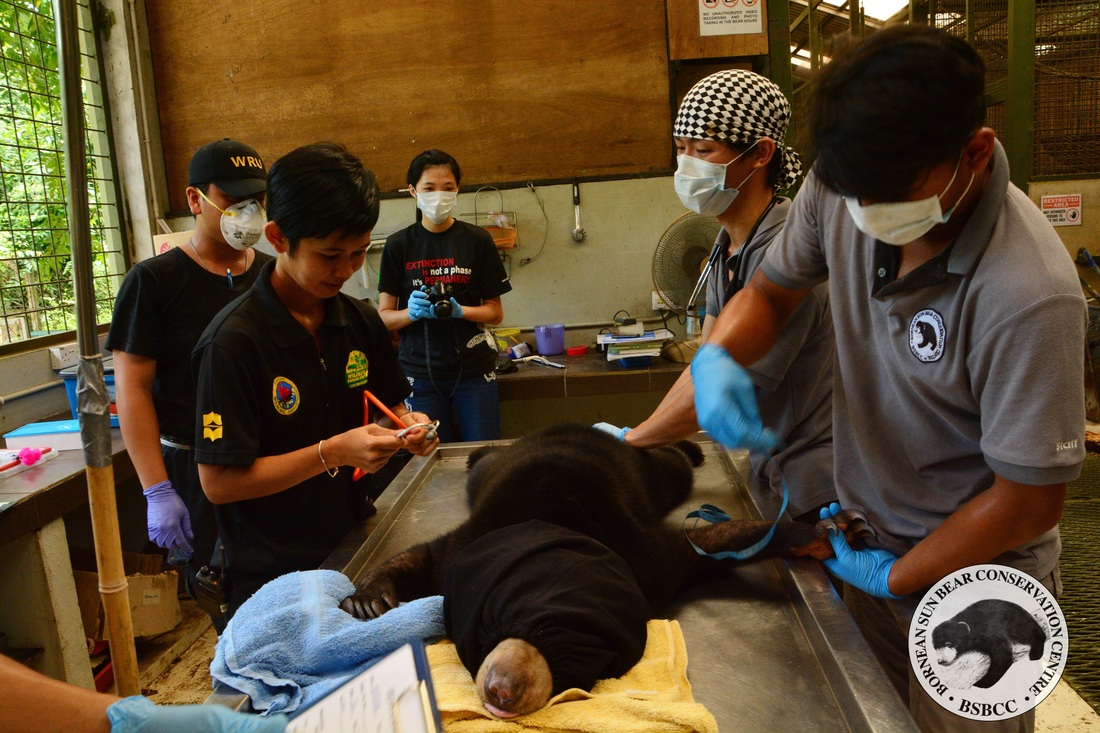 Dr. Laura and Dr. Timothy conducted a full physical exam and collect any samples needed for health and genetics. This include collecting blood samples,hair samples, dental records, and growth measurements. 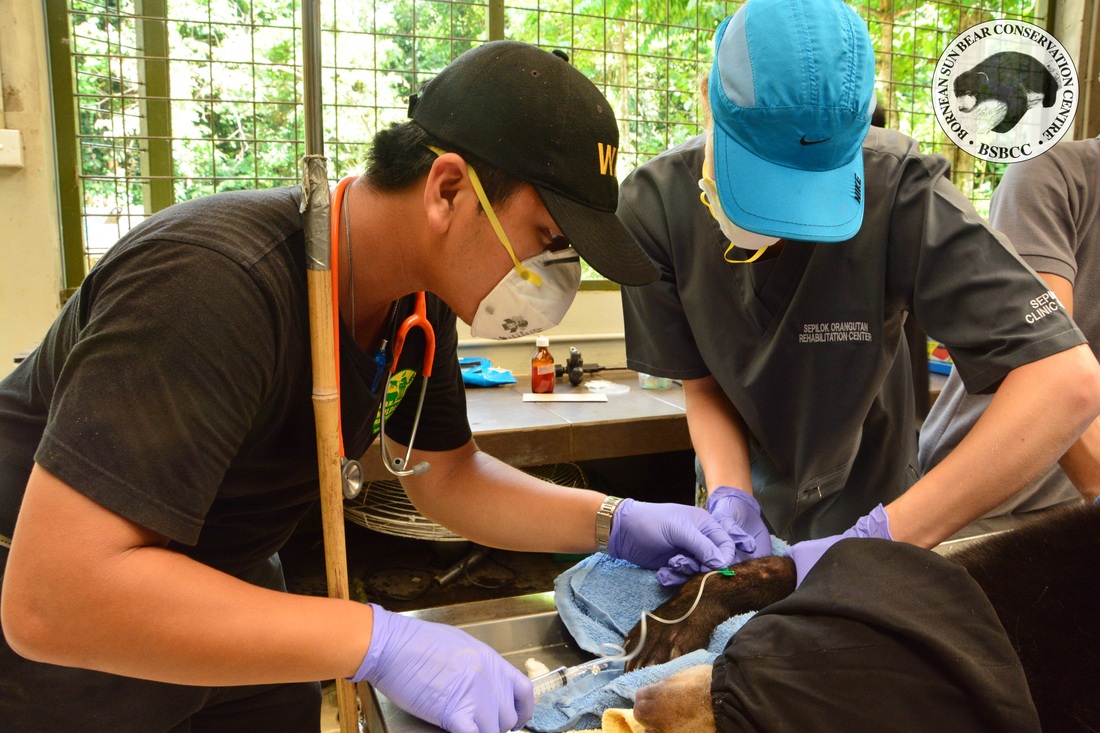 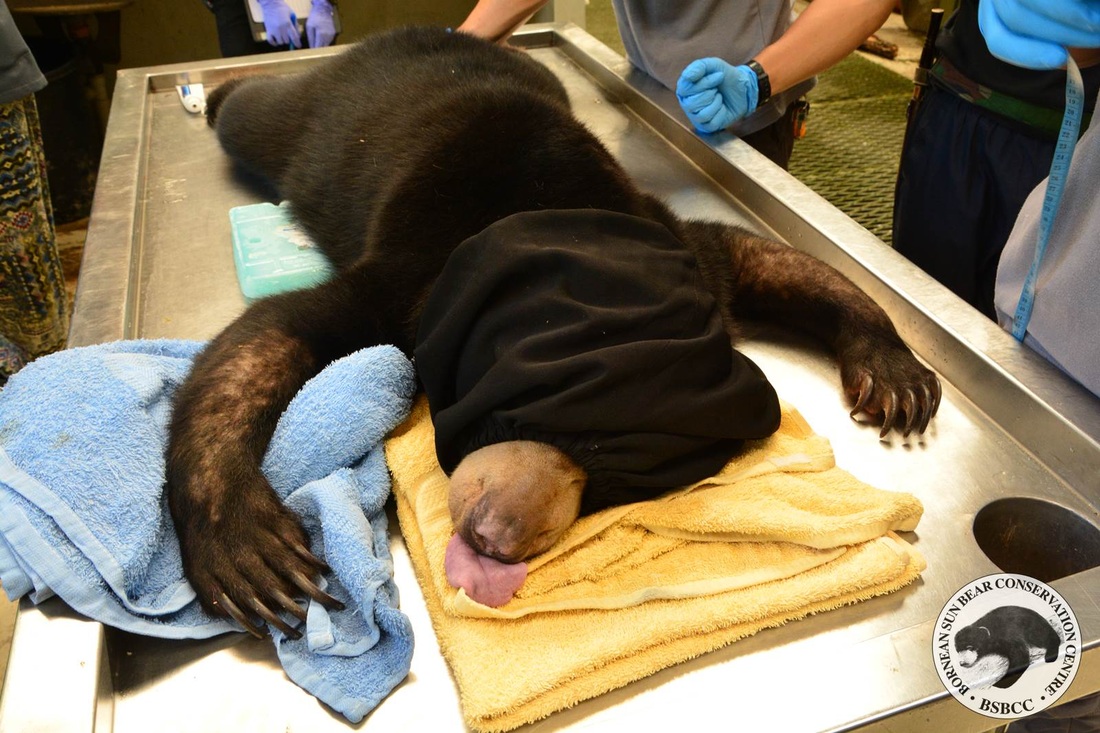 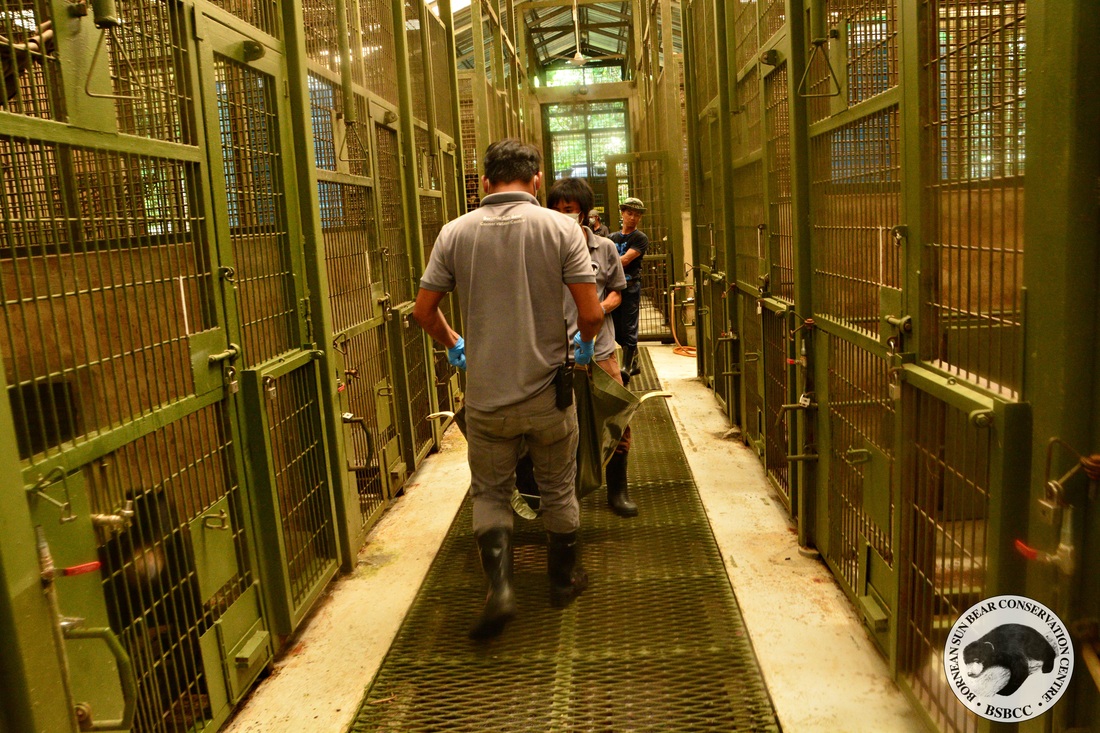 Finally, when all the checks have been performed and recorded. Chin is gently put in her new cages.The bears in the bear house took interest in her. 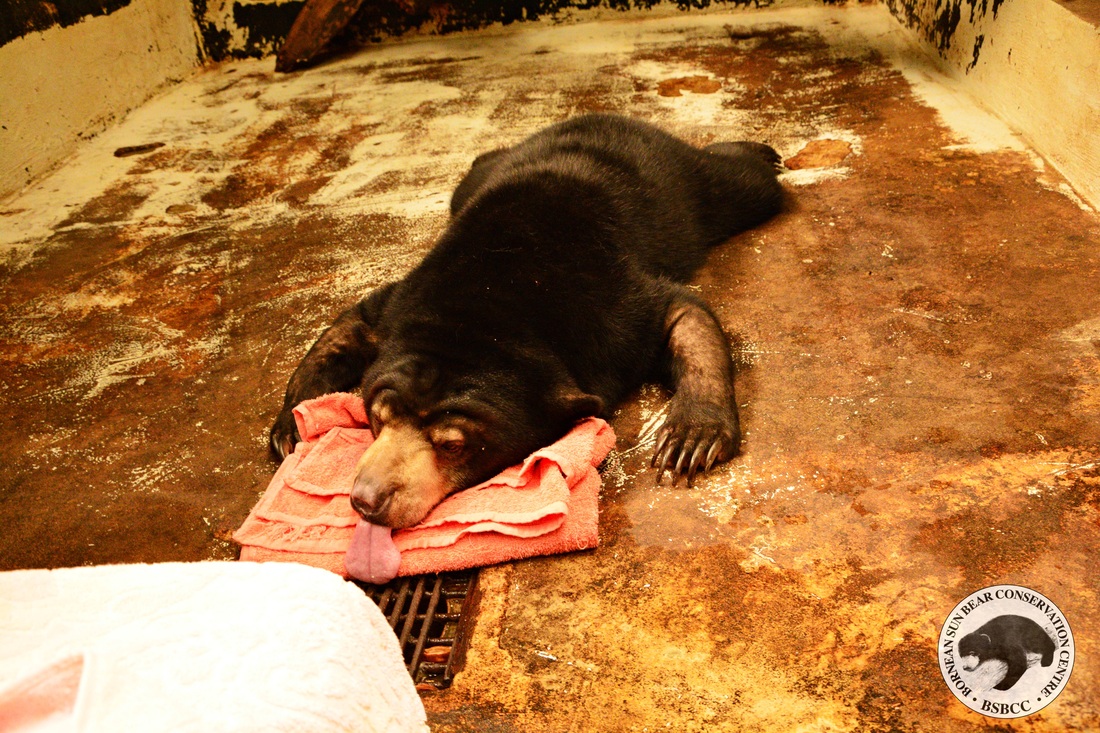 The bears in the bear house took interest in her right away; however Chin seemed a bit displeased upon awaking from the sedation. She barked, growled, and showed a bit of aggression once she began to hear and smell the other bears. 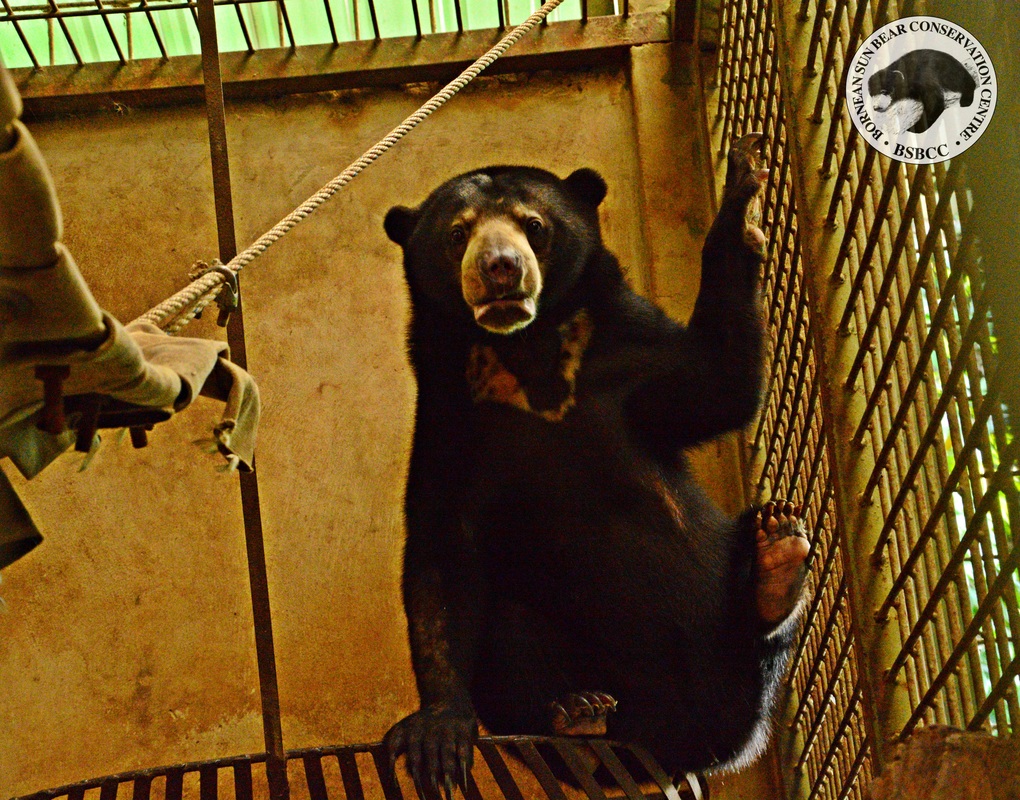 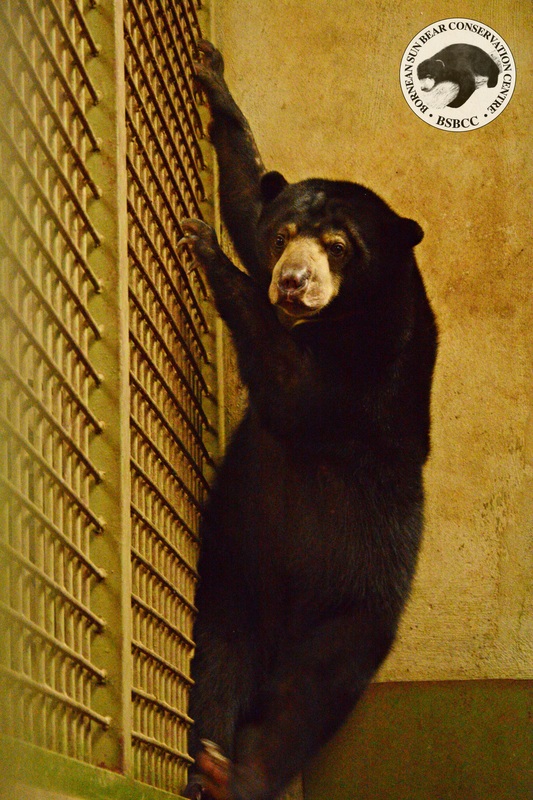 Growls for strange sound and people!

Over the next few days she began to settle into her new home at the bear house, but remained alert to her neighbours. Chin is very attentive and watches with curiosity and interest at the world going by. She is still exploring her new space and enjoys climbing around the cages while she adapts to her new home. 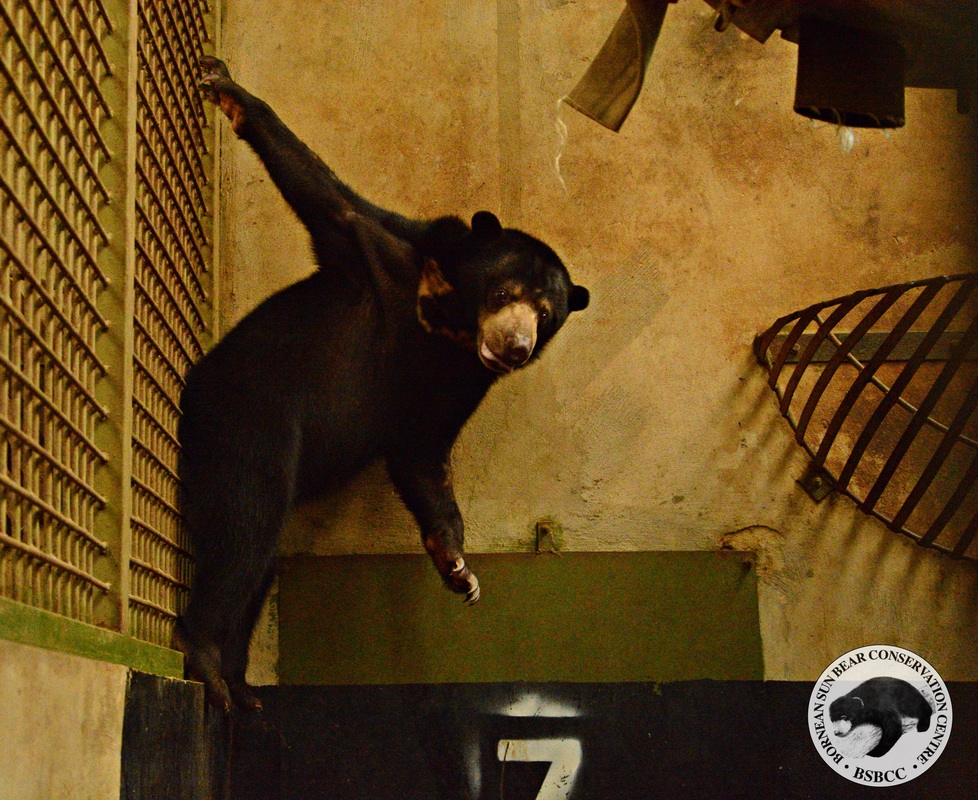 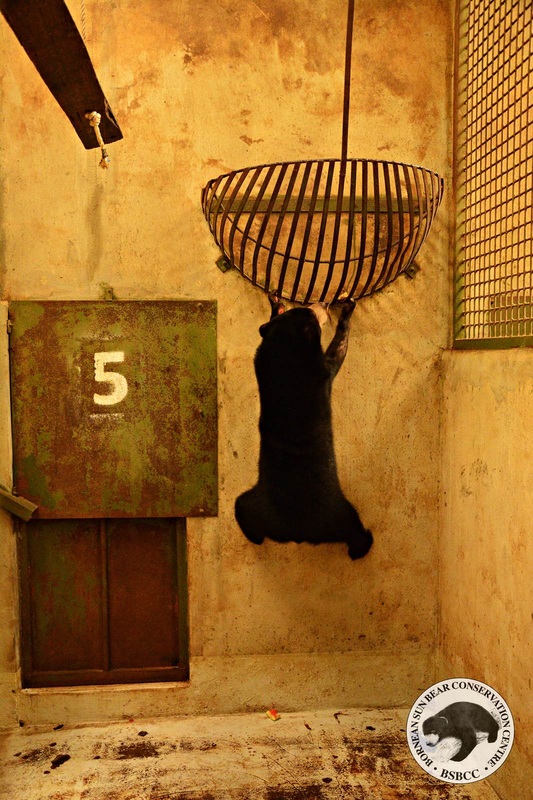 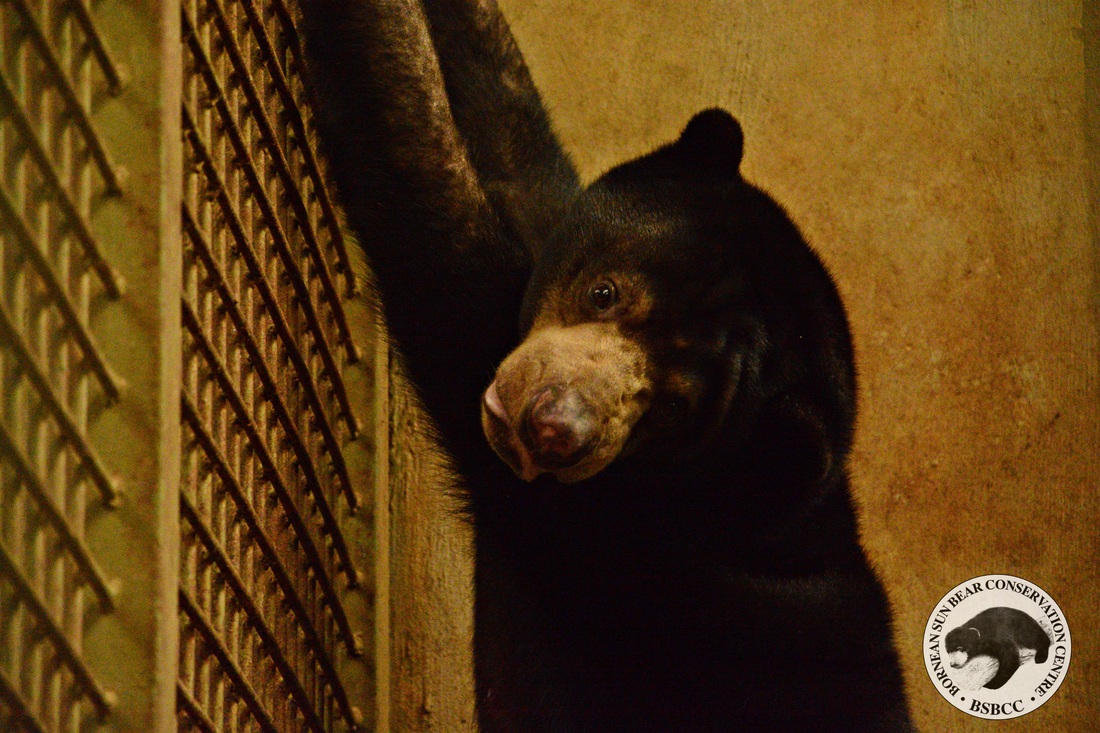 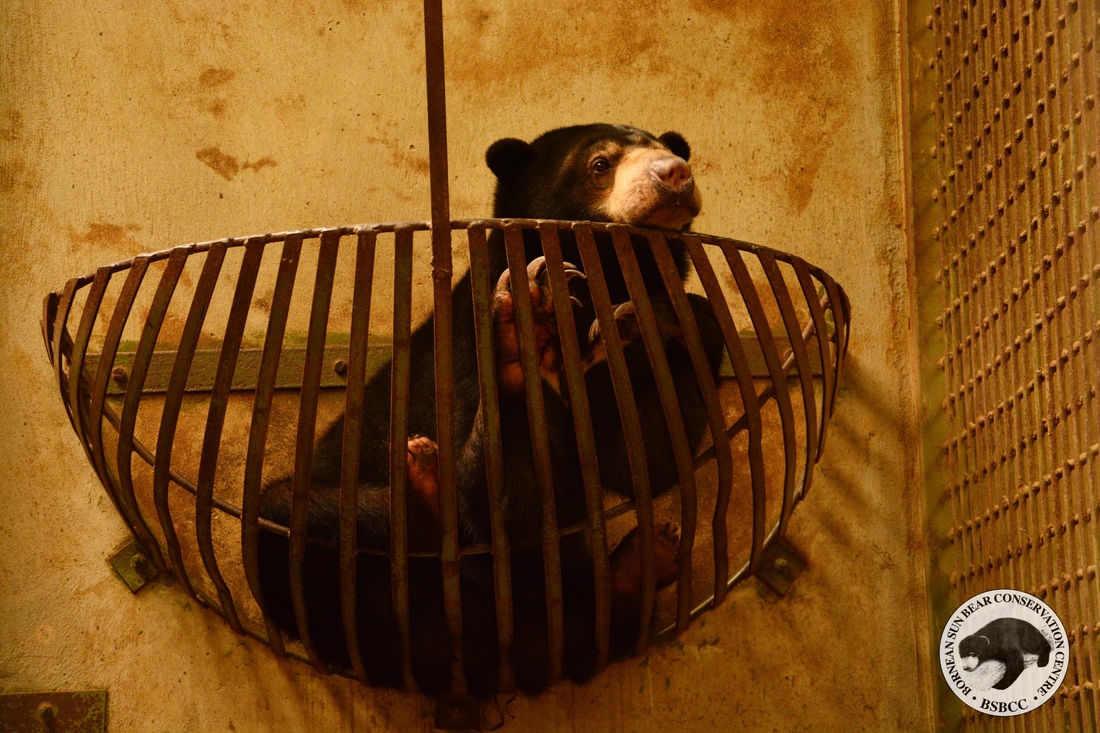 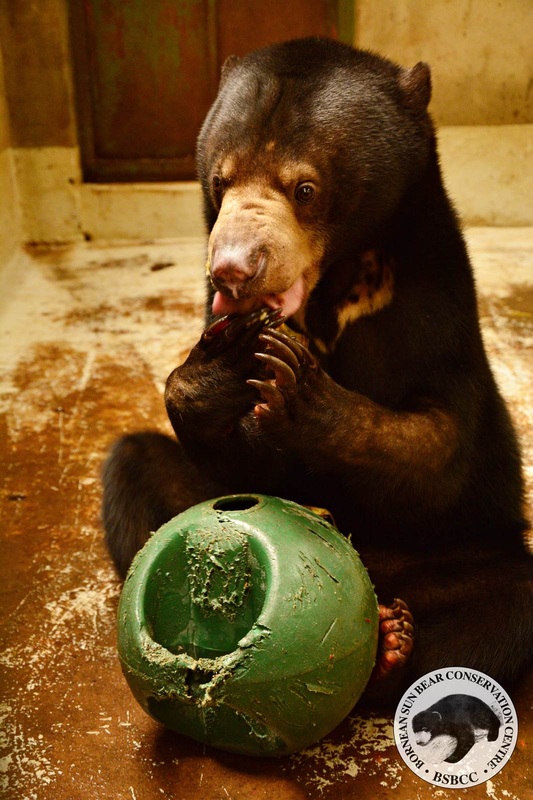 Food hidden in Aussie Dog Ball. This will encourage Chin to spend time searching for extracting her food.

Chin now has a brand new life free of fear and pain. The next step for Chin is she will be access in a pristine forest where she can climb high in the trees, forage for grubs, and socialize with other bears. This new lifestyle is just one step in the direction of becoming a wild sun bear. 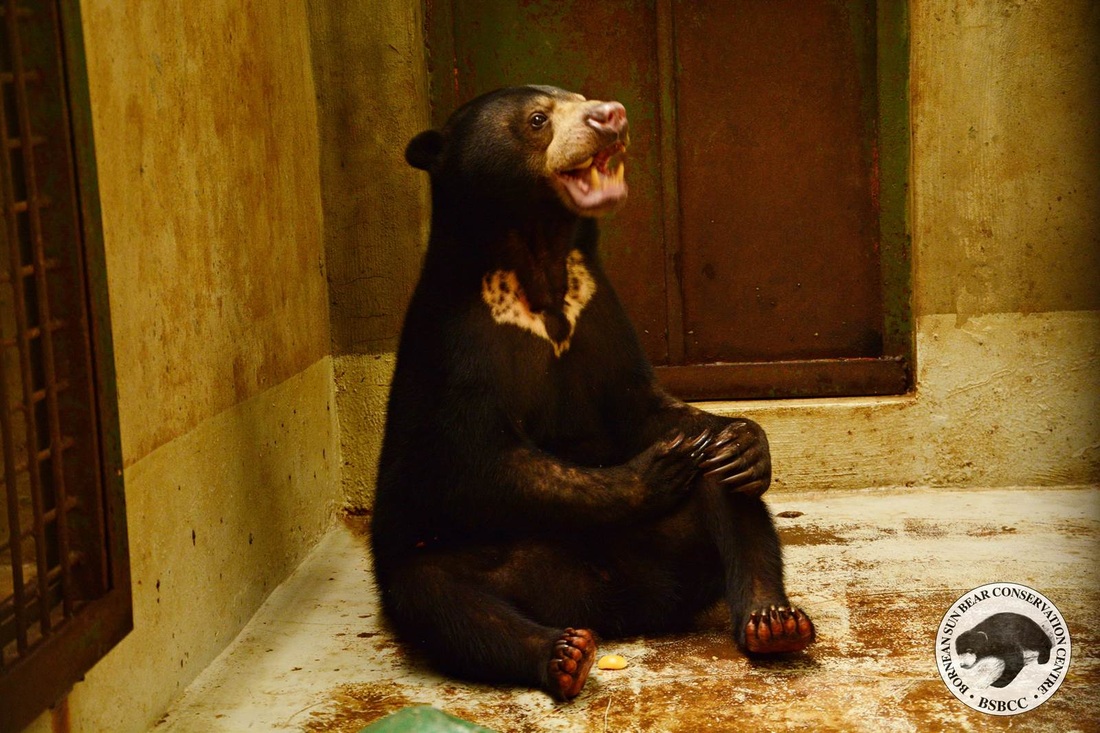 Be on the lookout for future updates on the progress of Chin. We look forward to the day when she can be introduced to the rest of the adult female sun bears.
Posted by Siew Te Wong at 4:10 PM No comments:

The car park was empty, umbrella canopies with beautiful decoration and chairs underneath were seen, loud music was playing and plenty of wildlife exhibition when I came to work today. At as early as 8am, the usual silent morning was suddenly hit by waves of locals and foreigners visitors flooding in. The reason? The 50th Anniversary of Sepilok Orangutan Rehabilitation Centre (SOURC) and the grand opening of Bornean Sun Bear Conservation centre (BSBCC).

Sepilok Orangutan Rehabilitation Centre (SOURC) in the Malaysian Sabah District of North Borneo was founded 50 years ago when Barbara Harrison initiated the very first rehabilitation centre in the world for rescued orangutans. The site is 43 sq km of protected land at the edge of Kabili Sepilok Forest Reserve. Today around 60 to 80orangutans are living free in the reserve. The new objectives of the centre has expanded to public education on conservation, research assistance and provide care for any other wildlife species. This centre is renowned for their work in rescuing and rehabilitating orangutans all aross the sate and has increased global awareness on the importance of protection of orangutans.

Carrying the same spirit and vision as Madam Barbara Harrison and SOURC, BSBCC was established at 2008 to help the Malayan sun bears. 2014 represented a milestone for BSBCC for it is when we are opened to public.  In fact, the centre had asuccessful soft opening on January 16th 2014 and since then, we had a staggering number of visitors – around 34,895 (16,978 local and 17,917 foreigners). Over the past six years, we have worked to improve welfare of captive sun bears in Sabah. Today, with the grand opening of BSBCC, we look forward to educating and reaching out to many more people across the world to raise awareness about sun beras and their rainforest habitat. Research and rehabilitation which are critical in the conservation of sun bears are areas of focus now that the centre is open. BSBCC is also helping to boost the economy through tourism. According toTripadvisor.com, BSBCC is currently ranked number four among 20 attractions in Sandakan. Visitors to BSBCC are doing their bit to enhance wildlife conservation and forest protection.

The grand opening of BSBCC and 50th Anniversary of SOURC was attended by Minister of Tourism, Culture and Environment – Y.B Datuk Sri Panglima Masidi HJ. Manjun and Director of Sabah Wildlife Department – Datuk Dr. Laurentius Ambu. The event went on for 2 days with the opening ceremony with the VIPs and various educational activities and exhibition held for the public.

Escort personally by our founder and

“I hope that this new centre will be another model for a successful facility that can be proud of.” said Datuk Sri Masidi Manjun.

The completely soundproof observation deck at the outdoor nurser

An interview conducted by

” When the centre was first set up, we had only a few staff working around the clock to care for the rescued orangutans. Now, not only do we have the assistance from several NGOs for the rehabilitation work, the centre is also a home for the sun bears rehabilitation program” Said Datuk Dr. Laurentius Ambu

Bobohizans have the ability to communic

our grand opening!
Posted by Siew Te Wong at 3:41 PM No comments: 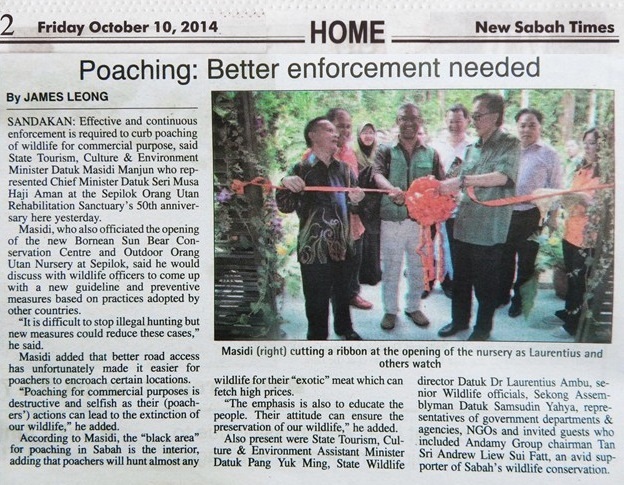 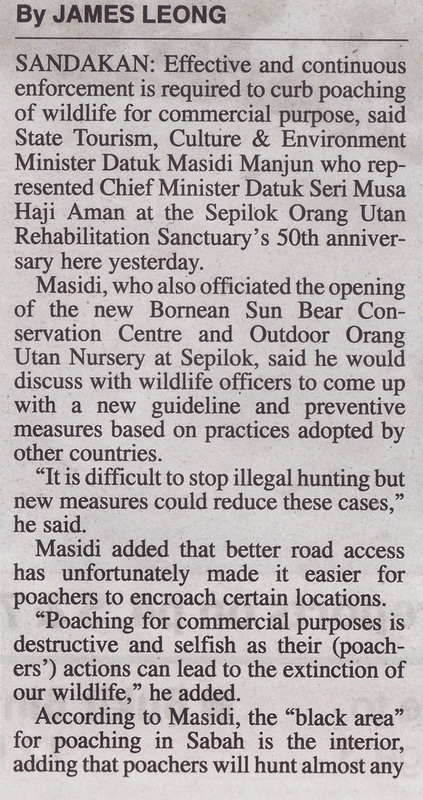 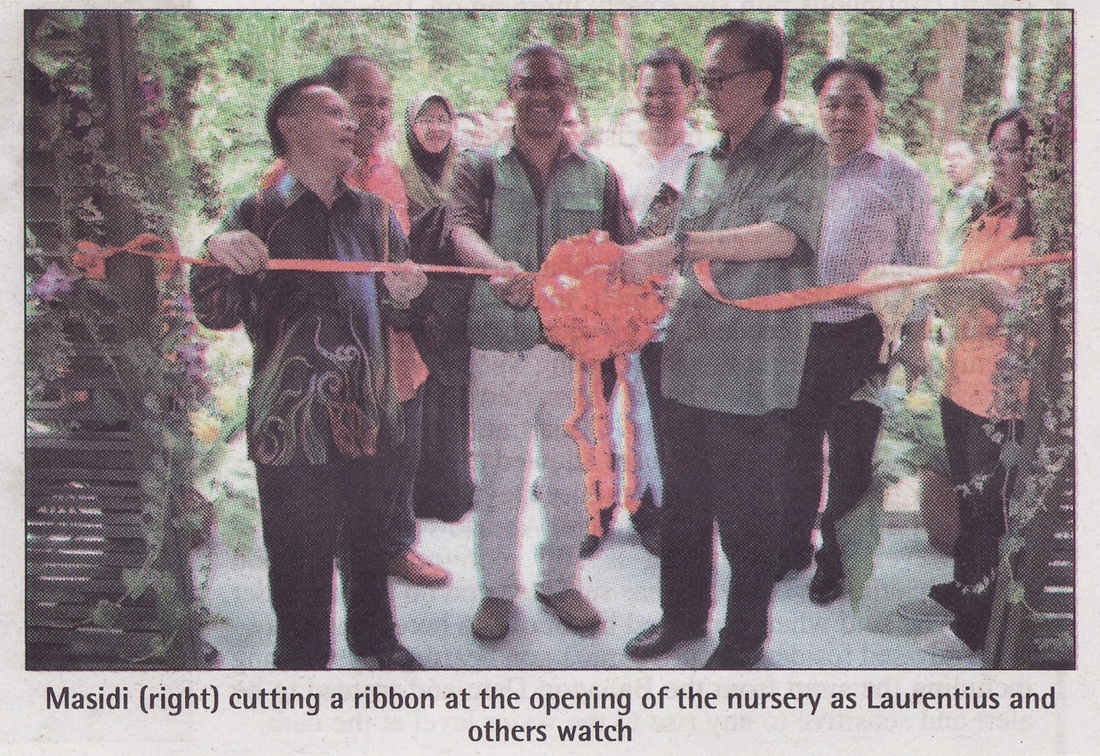