Learning to crawl is an important milestone for Luna.

She is practicing every day. Practice makes perfect! We can't wait for the day when she masters crawling skills!
Posted by Siew Te Wong at 8:51 AM No comments:

The baby sun bear, Luna, is like a human baby. Her behaviour includes crying, feeding, sleeping and playing. Crying is her main way to tell us what she needs. She will be bawling and moaning when she feels hungry, uncomfortable or unsettled.  It’s a sound that spurs us into action!

The Little One - Luna

Back on May 20, 2021, BSBCC unexpectedly ushered in the birth of a female cub, Luna. The mother, Bintang, was observed nursing and caring for her newborn attentively. However, a few days later, the cub was found to have low body temperature and had severe ear injuries and skin infections.

Therefore, a difficult decision was made to separate the cub from the mother. During that time, she weighed 353g and needed immediate medical attention. Caretakers were taking care of her around the clock. Now that her wounds have healed, and under the care of BSBCC, she is steadily growing.

Welcome To The World

Photos by Seng Yen Wah
Wonderful news, everyone! BSBCC has welcomed an unexpected birth on 20th May 2021. This has completely caught us by surprise as we do not have any plans on captive breeding due to the overcrowding situation in our centre. The arrival of this little one brings an array of emotions from joy to excitement and also anxiety as well since we have no experience in caring for a mother with a newborn cub. However, every lesson has starts from somewhere. 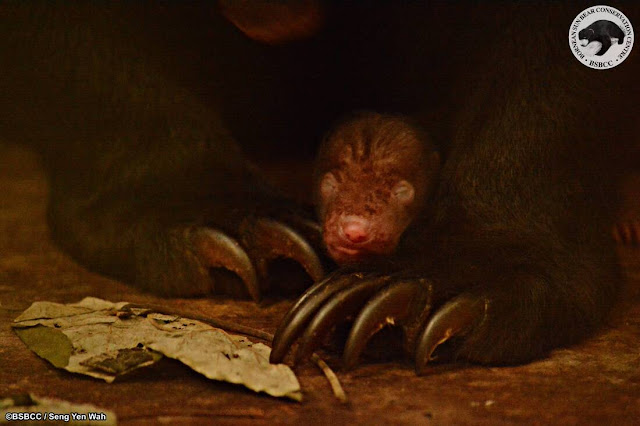 Bintang, a six-year-old adult female Bornean sun bear, the mother, was observed nursing and caring for her new born attentively. As we allowed instinct to take its course, the keepers were also diligently observing and recording the sow-cub interaction. 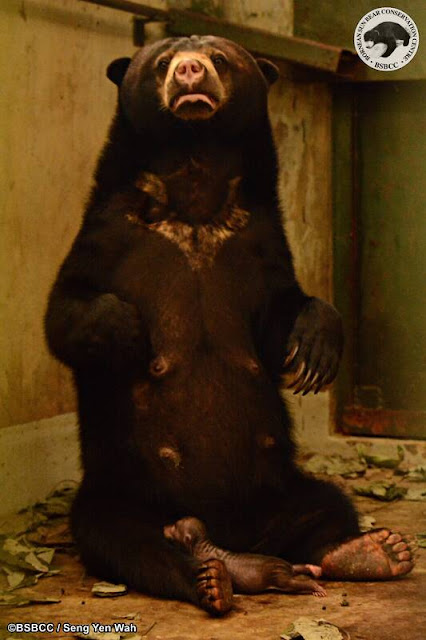 On the very morning of day 8, we noticed the cub appeared to reducing suckling on Bintang. Worried about the condition for the cub, Bintang was isolated and the cub was taken for a quick examination. The examination showed that the cub was experiencing hypothermia (low body temperature) and had severe ears injuries as well as skin infection. Due to this, the tough decision was taken to separate the cub from the mother. Once we took out the cub from the den, she was at a mere weight of 353g and required immediate medical attention. The decision was definitely a tough one for us as there is no doubt in Bintang’s mothering abilities. She was devoted for her cub as she was observed to be frequently nibbling on her cub and which was thought normal grooming behaviour. However, she over-groomed her cub and eventually she inflicted injuries on her cub. 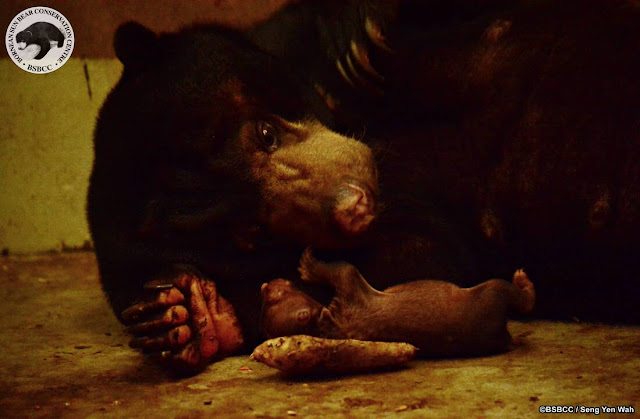 Despite the sleepless nights, we are blessed to see the cub steadily gaining weight and growing every day. She is showing all of us that she is a fighter as she survived through many critical moments such as maintaining her in the oxygen chamber several times. Hand raising her has been a big challenge but the team is working in shifts to take care of her round the clock. 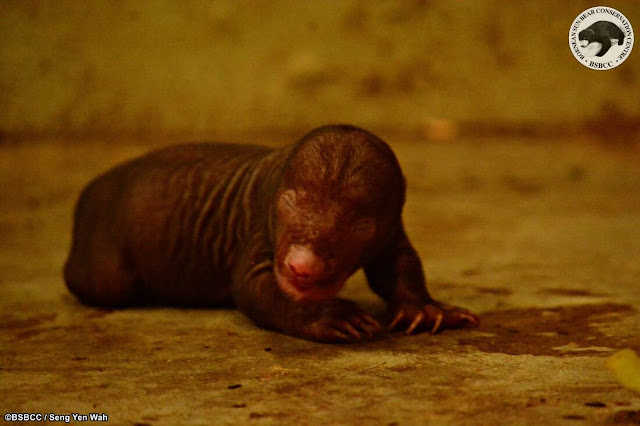 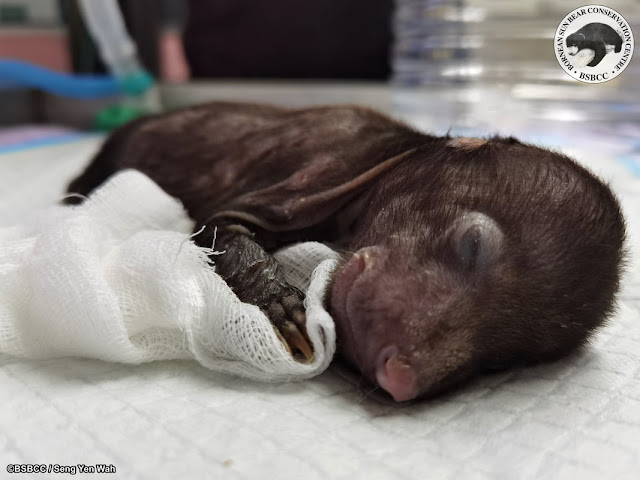 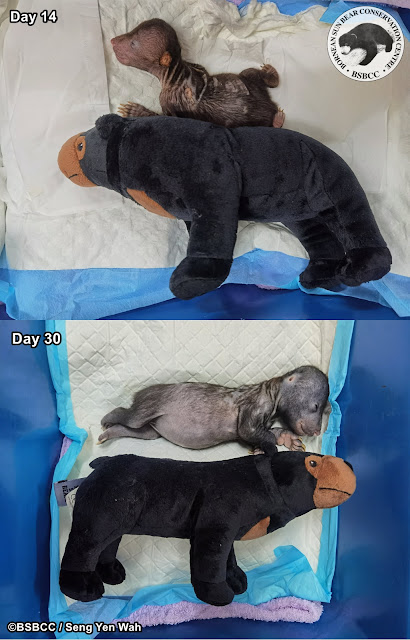 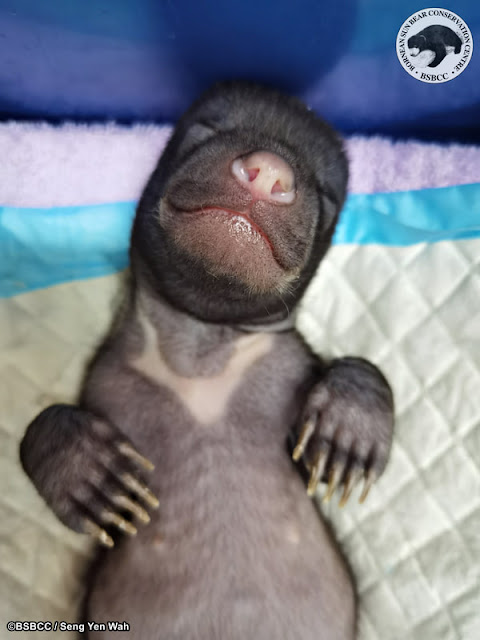 Today marks her one-month of age. In her development milestone, she has opened her eyes on day 28, doubling her weight on day 32 at 702g, and her wounds have recovered well. Although she lost both of her external ears, we believed she would transform into a beautiful sun bear. 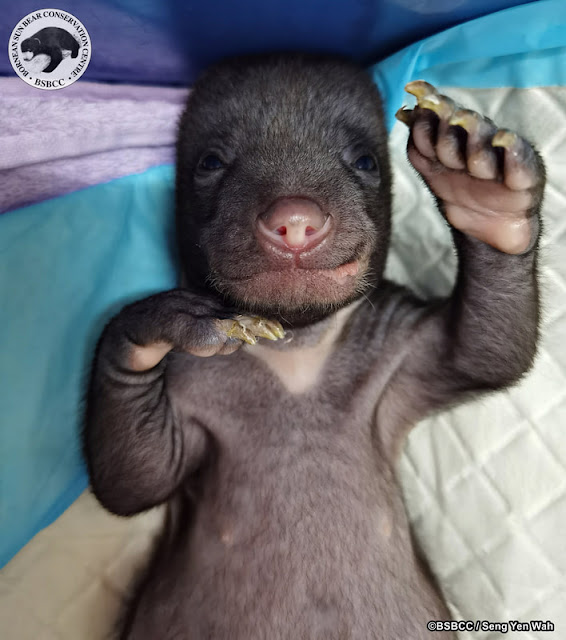 Stay tune to update from us regarding our new born on our social media platforms. Please continue to assist us in our constant battle to provide the best care for her  and as well as our other 43 rescued sun bear.

Mamatai is an adult female sun bear, at least 20 years old. She has beautiful big grey eyes, a short and plump body, adorable and downright cute! Mamatai is a happy go lucky bear who loves to greet the forest! She loves basking in the sun, and resting on logs seems to be her favourite activity throughout the day. Although Mamatai is getting older, she is still enjoying her bear's life. The forest makes her feel young and look great! This is why she loves the forest!​Forest is her natural habitat and her real home.